Anyone can build a simple crucible setup, consisting of HU/t procucing unit (e.g. burning box), a Smelting Crucible on top of that and some Molds next to it. This thing is used throughout the game, with minor changes to it (burning box upgraded to stronger one, crucible and molds changed to different materials). After getting used to “insert materials - heat up - watch the temperature - cast - repeat” loop the crucible handling becomes a simple task. But at some point, it comes clear that the process itself is not the problem - the time-consumption is. To avoid spending half of the gametime next to a boiling kettle, automation to the rescue.

I am convinced that stainless steel automation is the most important task of any non-cheating playthrough of GT6. SS is needed EVERYWHERE: multiblocks, normal machines, tool parts, screws, pipes, drums and more. More importantly, the required quantity of SS is likely counted in tens- even hundreds of thousands of units. Better get those crucibles running quickly.

This setup has been repurposed at least twice already, earlier it was used to turn iron into wrought iron. Wrought iron and annealed copper work the same, you heat up the base material into certain level and you are able to cast the “improved” version of it directly. No other input is required.

Processing logic is identical to stainless steel setup mentioned before. Materials differ, as 2500 K clay crucible and molds are no longer able to handle 2800 K annealed copper. Our Thaumcraft wizard pulled some “thaumium” out of his pocket, and it happened to handle the heat nicely. Molds were later changed to tantalum hafnium carbide, as thaumium was being re-used elsewhere.

Ah yes, steel. One of few materials to require true planning to make. Real problem lies with the process: Crucible must be inputted with KU/t energy (from engines, e.g. Electric engine) to turn 2046 K iron into steel. To accommodate with that, we constructed the following monstrosity.

This must be the worst designed machine in the whole base, as it takes a lot of space, sometimes outputs 3 steel and 1 wrought iron (lack of KU/t input?) and is ugly as sin. Please, if you have more sane procedure to produce steel post it below.

Speaking of sane production methods, smelting materials and combining them in a mixer is a massive quality-of-life improvement in the late game. After reaching technology level to create your “Smelters”, these can be used to smelt materials and input them into drums. All of the related processes happen inside our main “Miscellaneous machinery” hall, usually called “that place with a lot of machines”. 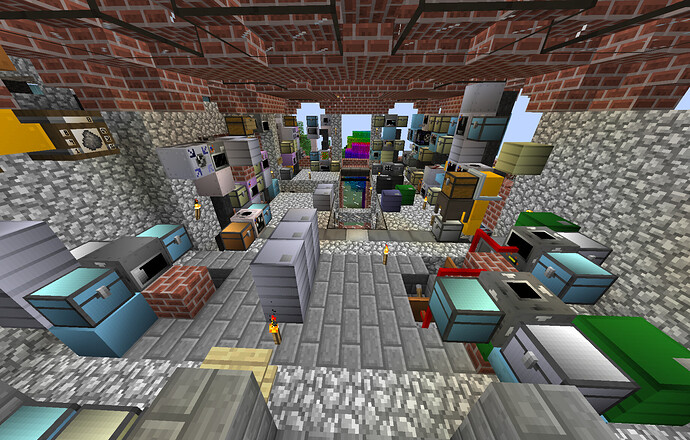 This hall includes basically every GT6 machine you can think of: from simple Press and Buzzsaw to more complex Laser engraver and Extruders, ending with Crystallization crucibles and a pristine Nanoscale fabricator. At first the hall was divided between LV and MV era machines, but later we decided expand it to include “Dense fluidized bed burning box”-using machinery, e.g. Tungsten carbide Extruder and Smelter. It was good to have all of the regularly-used machines within hand’s reach. This was also true for alloy production from molten materials, described below.

Chlorine is used in surprisingly many processes, including titanium processing, ore refining and battery production. Chlorine sources are scarce, but one of them is above others: sea water, as it is infinite.

After reaching MV era, we constructed following setup for continuously producing chlorine. It is solar-powered, requiring nearly zero attention. Automatically collect sea water via Drain cover and input it into the Electrolyzer. After few hours player can swoop in and collect few thousand litres of chlorine for later usage. Sodium Hydroxide side-product is also stored, we’ll find out soon that it has good uses too.

Last one of our examples include processing of one of the side products in the Aluminium production. In the material processing post you could see thousands of refined Bauxite dusts just waiting in the barrels. What can they be used for? Directly, nothing. But when shredded into dusts, these materials can be re-processed in intriguing way to create good amounts of Titanium-bearing ores.

There you have it, few of the setups we have been working with. No teaser this time, I am not quite sure what to write about yet. Thanks for your time.

Just so you know, Crucible Crossings can conduct Redstone that comes from above or below them. This means you can save on a lot of clutter with your Wires going to the Crossings instead of the Molds.

These posts are so awesome!