HBM has some compatibility problems with items that should be fluid

In HBM, bromine and xenon-135, which should have been fluid elements, are made into powder form. This may be due to the inconvenience of adding fluid output tanks to cyclotron and silex. Although gt6 can add “bromine dust” or similar materials in terms of compatibility, you can’t convert it to GT fluid bromine, and gt6 fluid bromine is useless. You can’t turn it into HBM bromine powder for use. As for xenon-135, it is useless in the current version and has very dangerous radiation, but it may be useful in the future. At present, the problem is what kind of material should be added when compatible, because GT has fluid xenon. (I noticed that you just fixed the problem of phosphorus in HBM, so I asked).

In addition, some formulations of HBM cyclotron use compounds of some elements to replace them (such as niter instead of nitrogen, fluorite instead of fluorine, quartz powder instead of silicon), which is convenient, but may cause some problems.

Oh thank you for all of those, I need a lot more play testing for a mod as big as HBM’s. I will leave this Thread open as a reminder, until I resolved those things.

So Bromine can easily be fixed using a Freezer and a Smelter Recipe.

The Isotope Xenon-135 is not existing withing GT6, so I do not have to worry about that one.

And is the Cyclotron really so easy/early/cheap to use that it could pose a problem in this case?

I mean, the use of these materials for cyclotron is for simplification. Although nitrogen and fluorine can also be added in the form of fluid cells in theory and put into the cyclotron like antimatter, it is too troublesome. However, gt6 adds silicon dust, so can we put it into the cyclotron with silicon dust instead of quartz powder when gt6 is added?

Also, can the radioisotopes of HBM that have no use for the time being be put into the matter fabricator? I think this is a feasible way to dispose of them safely…

PS: I found that HBM added its own coltan bedrock ore. will it be compatible with gt6 bedrock mining drill?

PS: I found that HBM added its own coltan bedrock ore. will it be compatible with gt6 bedrock mining drill?

Uh what? Considering there can be a lot of misunderstandings, I would like to know what you mean by “Bedrock Ore”. Because there is those Blobs of “Depth Ore” NEAR bedrock, which you COULD mean, which have absolutely nothing to do with my Bedrock Ores.

And I dont plan to add Stuff to HBM’s Machines, because I am not familiar enough with the Gameplay of the Mod. 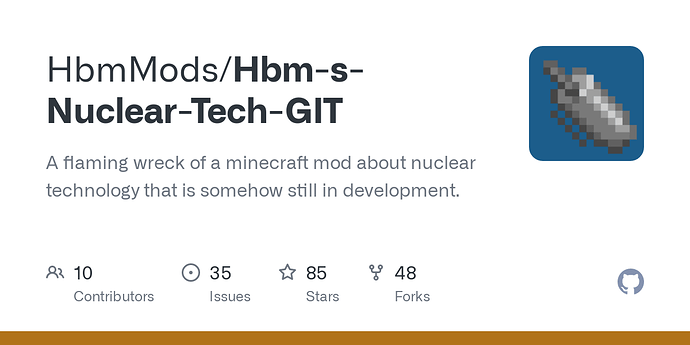 You might want to shut down your nuclear reactors before updating, since low-pressure steam will block your current setups! Added Coltan bedrock ore Can be mined my mining drills for a slow but i...

In addition, it should be noted that the small bismuth ore of gt6 may cause the techtree of HBM to skip (in HBM, bismuth needs to be extracted from the nuclear waste of RBMK, and bismuth is used to make versatile chipsets to crafting some lategame equipment)

Okay I solved all the mentioned things that i’m gonna solve, so I can make this Thread stop bumping around.

Recently, HBM has updated many things, such as sulfur caves and asbestos caves. We need to pay attention to whether there will be problems in the generation of the world.

In addition, HBM has added some chemicals, such as chemical factory, and some messy things (but it may not matter).

Is the Fluid called “Acid” and even destroys Bedrock Blocks? Because I noticed that one ages ago. XD

As for the Caves thing I need to look at that I guess. ^^

No, it’s another kind of liquid called “sulfuric acid”, which will be generated in the sulfur cave and can be bucketed and poured out. It may be synthesized in the chemical plant in the future.
ADDED:HBM has recently added its own rubber and bakelite. Maybe we should pay attention to the problem of oredict.

oh, one thing i’ve come across when using NTM with GT6: HBM’s dynamite and GT6 dynamite aren’t the same, last i checked. will post more as i remember them or as i come across them.

I could add ore dict names to NTM dynamite, although I’m not sure what quantities GT uses for that. NTM dynamite comes in “balls” (same texture as clay balls so it might be the same quantity of a quarter block), which can be crafted into sticks (2 to 4, so one stick is half a ball) and then into TNT-like blocks (8 sticks per block, that’s 4 balls, which coincidentally matches the quantity for clay blocks).

Oh yeah I need to look at HBMNTM again don’t I. XD

GT6 Dynamite is probably a bit different. 1 Dust of it is 1/9th of a Block of Dust.

Using 1 Dust of it is enough to make a single Dynamite Stick that can blast away a 3x3x3 of normally resistant Blocks, if you want to blast harder stuff like Obsidian you need to put 2 Dust into a Stick of Dynamite.

In order for Dynamite Mining to actually make sense it also applies Fortune 5 to the harvested Ores, so people actually have an incentive to set up proper Dynamite production with all it’s different steps.

There is also a cheaper Gunpowder based Boomstick that does only Fortune 3.

My Dynamite is by the way a great way to harvest those dense clusters near Bedrock which require Explosions to be mined.

Also worth noting is that GT6 Ores themselves do the thing later Vanilla MC has introduced with dropping a quantity of “raw Ore” when fortune harvested, so it makes still sense to do it even without those dense Bedrock Clusters.

In order for Dynamite Mining to actually make sense it also applies Fortune 5 to the harvested Ores, so people actually have an incentive to set up proper Dynamite production with all it’s different steps.

Yes, i do this for some rarer ores. But i would actually REALLY REALLY love it if the drill (which conveniently links to the remote activator) could place dynamite 2 blocks deep.
That is my pet peeve with dynamite right now. For optimum results you have to remove a block and then place the dynamite in the hole you just made.
Whereas in reality you drill a hole and place dynamite far enough in to have the optimal result.

Sure, one could argue that it’s too easy already in MC. But when things like the mining drill makes almost as quick of a work of the stuff as placing dynamite (I.E, it’s only faster with dynamite if you include the useless rocks you get) and you have PLENTY of the stuff around to be mined, setting up the production chain makes less sense. You are spending some time just making the sticks so if one takes that into account then using the mining drill is actually faster and more convenient.

Which brings me to another point about dynamite. It’s real life use is to make breaking up rocks many many times faster than picking/smashing/drilling it out by hand. Short of a TBM.
So yes, being able to just use the drill to place them in the center of a solid 3x3x3 cube and detonate quickly would be balanced in that regard.

BUT, another problem with dynamite is the lack of easy KNO3. In real life they cultivated KNO3 using excrement. So they had plenty of it to nitric acid to make dynamite.
In GT6 your only sources are rare random and rather small deposits of raw niter. I’ve yet to see another source.
Or a lengthy and very energy expensive process of getting nitrogen from basically thin air and turning that into nitric acid.

If i could “ferment” KNO3 from some stuff that can be “farmed” then i would definitely consider using dynamite even without the ability to drill it into the center of a 3x3x3 cube. I would just be wasteful because i can make more of it only using lots of space if necessary.
But right now i can’t make dynamite in large quantities without already being in the late stages of the game where dynamite still makes little to no sense.

I my mind, dynamite should be about the next step after having used ten or so chromium picks.