If you are trying to build a building using only the items added in Gregtech6, your only choices for light sources are: Lumium, Greg O’lantern, Glow Glass, ZPM, and Glowtus.
All of these are difficult to use, and in fact, torches are what we use for building. However, torches do not look good.
It would be nice to have a light source that is easy to make and looks similar to the Gregtech6 block. 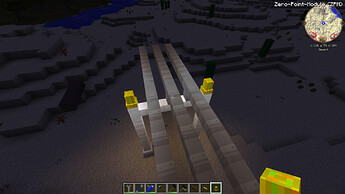 All of these are difficult to use

Hey, Glowtus was made to be EASY to use! perfect for that one Middle Spot of Water in Farms!

But yeah there is not many choices in GT6 alone, but if you want full Block Lighting, Take Lumium Wire, Coat it in C-Foam and Paint Canvas on it to look like the Block you want it to look like.

I’m sorry. Difficult to use means that there are few things you can just place like a torch. The only ones that can be used are Glow Glass, Greg O’lantern, and ZPM. Others need to be prepared for use as a light source, such as needing to be water, not being able to be placed in the air, or needing a red stone signal.

I’ve suggested candles before, but it doesn’t seem to have been adopted.

An analogy… suppose you had an actual fusion reactor.
If you put a torch, a pumpkin lantern, a glowing lotus, or a candle here… it would look a little strange, wouldn’t it?
For example… a light source that emits smoke in a facility that makes precision electronic circuits? Oh, would the quality be okay…?
Of course, this is a game, so there’s nothing wrong with torches or pumpkin lanterns. It just doesn’t feel right.
There’s no problem if the walls and roofs of the fusion reactor and nuclear reactor buildings are made of dirt.
A light source covered with C-Foam on the floor and walls? That’s certainly useful.
In the first place, many blocks in Gregtech are not spawned by mobs, so night vision potions are fine, right?
You don’t even need a light source.
But people who play in Gregtech don’t just dig holes and put machines in them, they make their own amazing buildings. They make buildings because it looks cooler that way.
The reason I want cool lights is just to decorate.

The problem is that in minecraft, luminescence does not require energy, and the brightness is up to 15. This makes all lighting devices with a sense of “technology”, such as incandescent lamps, fluorescent lamps,neon,led and gas lamps, have no advantages over the vanilla light source. Although some mods also add lights that use electricity or gas, they are not as convenient to use as the original light source. Unless they have special effects (such as immersion engineering powered lantern), they are really unnecessary except that they are good-looking and a little troublesome.

Does that mean all the decorative blocks are useless?

In a practical sense? Absolutely. Most decorative blocks just have the advantage of being relatively cheap, and some even have unique functionality like for example the scaffolds. Sure, electric lights might look better but I’d much rather have sticks dipped in oil to illuminate my nuclear reactor compared to electric lights which will give up on me when said nuclear reactor catches fire. In any case I’d argue redstone lamps would fit the industrial theme and they have the advantage of remaining on no matter how much graphite is on your base’s roof.

Cant certain things like I think Radium be used to make Lamps that glow in the Dark? Pretty sure something like that was used as a Backup Lighting Solution for the Military.

Some electric lights run on batteries, right?
How about putting batteries in your recipes?
If it is something that consumes little power, like an LED, it can keep glowing for a long time.
I looked up LED’s, and the materials are (AlGaAs) red, (GaAsP) yellow, (AlGaN) green/blue, and (GaP) red, yellow, and green.
Gallium and arsenic are often obtained as by-products, but they have few uses, so I think they should be used for lighting materials. (This does not mean that they have no use at all).

luminescence does not require energy

I could always make torches/pumpkins ‘burn out’ randomly over time.

Not closer to reality, but rather something that encourages more “powered” alternative usage. ^.^

Hell, could lower their light output as well.

Wouldn’t be at all hard to ASM in, even behind a setting, hmm…

Minecraft Gameplay wise, burning out Torches really sucks. That’s why I would not implement that sort of thing at all. Even though it is probably easy to pull off.

I like to tier my lighting
Tier 1: I usually make torches single use and change the recipe to require flint and steel or variant (tool damage craft), and drop burnt out torches that need to be re lit to be used. Did used to burn out but even on a long time delay it’s kind of annoying going and relighting them each day.

Tier 2: Candles, candles are multi-use but require wax and string which is harder to stock in early game.

Tier 3: lanterns and jack o’ lanterns, crafted with candles but can be placed on ceilings and under water.

Tier 4: Redstone lamps and variants, requires the most resources but is red stone controllable.

Not sure where lumium fits in, probably tier 5 but I can’t see why I would upgrade from redstone.
I also use lava if I’m using hardened liquiducts or portable tanks which I think is the most classy, but might be lag inducing, haven’t confirmed that.

Are you aware that what you are saying also severely fucks over decorative abilities of people? Not to mention implementing a “Tier System”, which by the way is already one of the worst Ideas I kept in GregTech as a whole? I would NOT go with a Tier System if I did a GT7.

compromises decorative players in what way? I’m literally just telling you what I use based on what’s readily available to me.

Then make some better lighting! Maybe start with some gas burners that burn a trickle of some burnable fuel on whatever pipe they are attached to.

Are you aware that what you are saying also severely fucks over decorative abilities of people?

You could easily make a gas-fueled torch-looking thing as well, I could imagine the gas source could have a lot of possible ‘looks’, perhaps being torch-like to start, but you could put things on it to look like a variety of different things. It would need to be a TE anyway so you could have a whole whole lot of possible designs. Ditto with electric and more as well!

Sconces, and yes early street/home lighting was all gas based, either from a bottle or piped in.

compromises decorative players in what way?

Imagine actually making GOOD use of Torches in a decorative Build? Not every Build has to have a modern-ish flair, and more importantly under normal circumstances there would be PEOPLE relighting and replacing Torches and such, which is not the case in Minecraft.