How feasible would it be to have something like immersive engineering’s wind mills directly power an axle?
They work by attaching to a dynamo to produce RJ but it would seem they would theoretically be generating low RU to do this.

The only reason I dont wanna do this is the Windmill Rotor Models, because I just dont wanna bother modelling those, apart from that its rather easy.

I tried my hand at implementing a Watermill, but since I also did not want to make a 3D model I thought I would try to let the player build something and then just spin it around.
That would allow for way more creative choices.

I got as far as having a mainblock, which scans for kinda rotationsymmetric wood blocks (it does not care for the type of block, but for there bein one).
As well as replacing the found block with invisible placeholders to keep the hitbox working.
But I got stuck at the rendering…

I wanted to reuse the renderBlock.renderBlockByRenderType method, but either it is not rendering at all, or it renders in some faroff place, where I cannot see it. I am not sure…

ah, I just got it to render a block.
The textures are messed up thought.

Note: Watermill just felt a bit too cheaty to me to make, that one would probably work with simple Blocks that are placed in a specific Shape, but then the balance reason of why not spamming those everywhere comes up, and limiting them to Rivers while being a possible solution also makes it look a bit derpy since all Rivers have the same height at every location, meaning you dont have actually falling water to drive the thing visually unless you make a stupid looking contraption like in Immersive Engineering.

Yeah, I also thought about the balancing.
I settled for limiting it to rivers for now, since it is nice to settle next to rivers anyway because of the unlimited freshwater you can get from them.

In terms of energy production I will limit it to just enough rotational energy as is needed to power the first automatic hammer after conversion to ku.

This way, even if not limited to rivers it would be way to weak to just spam it and merge the rotational energies with gearboxes. It would probably be more efficent to use the space as treefarm for boilers.

As for the derpy river generation if I remove the limitation for the waterwheel to be in the river it would allow one to build their own river to place it in.

Since I also plan to make the meager max output of the waterwheel easily achievable I would also avoid the stupid looking contraption from immersive engineering which only occures because of minmaxing the output for the waterwheels.

Behold! a stupid looking contraption like in Immersive Engineering: 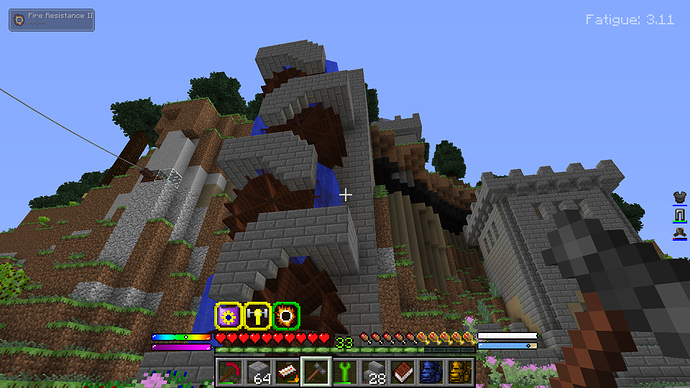 this one at least looks somewhat good, some dont even make the effort of walling it in, or use ugly looking Microblock Dots to hide the walls like Direwolf20 did back then.

That’s one of the prettiest ways to run IE waterwheels I’ve seen, Donzil. It’s also several pieces short of the micro-maxed wheel design my colleagues have been forcing us to use (and put in dirt boxes).

As for avoiding ugliness and spam, I think that could take a note from Reika’s waterwheel, which requires a waterfall instead. Make it detect the falls height (or even require a drain + vertical pipe - or extendable multiblock) for power scaling. If extendable, I’d go so far as to make the power also scale with fluid throughput [which would really like a fluid spiller, that voids on discharge into SeaWater or RiverWater]. This version representing the hydro turbine in damns rather than the medieval mill wheel.
Could also be done with a detect reservior lake + output river with height difference (and maybe even only work in a HILLS or extreme hills-type biome), with an exclusion area similar to the Lightning Rods [representing minimum catchment basin].

Thank you gentlemen, I aim to please.

Personally I think waterwheels and windmills could work, if they only produced a fraction of RU/t compared to a turbine, enough for a grindstone or some other real life concept.

The height of the water falling could work, as this would fall in line in much the same sense as windmills at greater elevations producing more energy.

The height of the water falling could work, as this would fall in line in much the same sense as windmills at greater elevations producing more energy.

That’s how Reika’s and my even older mod worked, it was the height of continuous water fall that was falling onto the water wheel.

I got the rendering to work.
Behold: 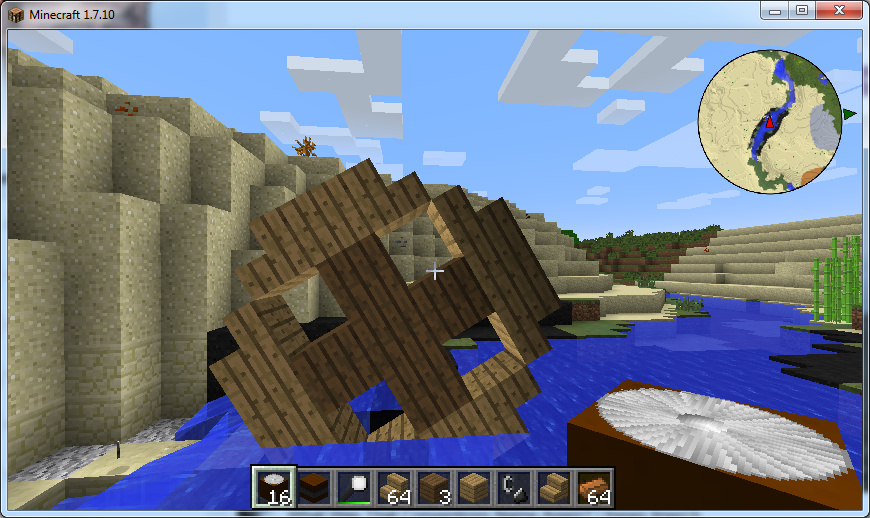 It still has some issues with the blocks adjacent to other blocks, but otherwise it is fine.
I had to do some trickery to actually rotate it, but I found some similair questions that gave ideas how to do it.

I still need to extend the list of allowed blocks in the structure as well as make a check that there is actually water next to the structure and let it produce power.

After that I should probably bring the gregtech version up to date, so I can use the axles in the recipe.

The waterwheel is now pretty much done. The only thing left would be to further test it and maybe change its recipe.

What exactly would be the best way to share the code? It is currently just added to the code of the gregtech git clone.

Should I push it to a fork/ branch or should I put it into a gregtech addon (I saw the example code for that, but I did not read it yet).

Also from what I have seen, even though the Waterwheel looks great, it doesn’t really fit my Art Style to have “actually rotating Blocks”. I prefer “Animated Texture that lets it look like the Blocks Rotate without changing the Shape or Angle of the Blocks”. ^^

Actually looks great, would like to see a industrial one too, with turbines (multistructure) with controller and stuff but yeah, good one.

Still had some Oredictionairy stuff to do to get it to work with all the wood blocks.
But now that is done.

So for now the addon is done. It just needs some testing I guess… , but I did test everything that came to mind except for actually playing survival with it.

I just tried, but it seems I cannot add links to my post yet so I cannot give a download link yet.
I will open up a new thread for the addon once I can thought

I just tried, but it seems I cannot add links to my post yet so I cannot give a download link yet.
I will open up a new thread for the addon once I can thought

Your profile is super new so it hadn’t been auto-bumped yet, did that for you so you should be good now.

Thanks ^^
I’ve played Gregtech for a while now, but I only picked up modding as a hobby recently so I decided only then to make an account