Hello, let’s have look into GT6 power generation we used in our server. As described in the ore processing post, main gameplay loop of GT6 revolves around processing ores. You go to get stuff and use it to make better stuff. Simple enough. There’s still one caveat that every player will have to face at some point: power consumption of the machines.

Power in GT6 comes at many forms: KU/t, RU/t, EU/t and so on. Getting electric power (EU/t) is not a magical click of a button that makes all problems go away- instead, it is a balancing act between supporting infrastructure (batteries, cabling and EU/t production) and consumption methods (EU/t to RU/t to run centrifuges, EU/t to KU/t for crusher machine…). It is generally good idea to move into electrical machines when you can, as they require less manual upkeep and logistics in the long run.

Where do you start? Steam power, of course! Make a Boiler, fill it with water, heat it up with Burning box and use the generated steam in Steam engine (KU/t output) or Steam turbine (RU/t output) to power your machines. Simple enough? Well…

GT6 Bronze era steam machines are really powerful compared to manual crafting, but also very dangerous. Simple “I forgot that thing” may result you losing an hour of work, and good chunk of your base on top of that. Surrounding steam producers with blast-resistant materials is recommended.

After we got the initial ore and material processing going (Crusher, Sluice, Lathe, Compressor…) it was clear that the situation had to improved: it took considerable amount of time to baby-sit each boiler, keep the water flowing, clean the calcification and provide them with fuel. This would not last. And as it happened, one of us made an important discovery: “hey, theres diesel engines, lets try those”.

Diesel engines are such simple, elegant and easy-to-use power producing machines that I am convinced Greg must have added them into GT6 by accident. Just insert liquid fuel into it, point it towards RU/t consuming machine and leave it there. As an example, picture below has all things the Centrifuge requires to function (Diesel engine improved with Machine status display cover, adding On/Off -switch). Difference to steam setup is immense.

Now we have a working configuration that requires little upkeep, but nothing to fuel it! Steam is useless, Creosote oil does not work and Oil is nowhere to be found. What can be done here?

“hey look at ethanol, it should work”

We did, and discovered a way to generate Diesel engine -compatible fuel that is infinitely renewable, large in quantities, simple to make and easy to handle. Ethanol fueled our base all the way from late bronze era to LV Electric era. All of this was possible with little help from another great mod, Thaumcraft.

Creating Ethanol requires produce, and we decided to focus on single thing: delicious potatoes. One of our players was already skilled with Thaumcraft, and proposed usage of Clay + Wood Golems to harvest, re-plant and collect the potatoes in an automated farm. Following setup was used in MUCH larger scale out-of-picture, but only thing left now is the core farm located on the roof of Witch’s Hut.

Items are collected into single chest, after which the items are outputted into BC Transport pipes. After a quick sorting with a single diamond pipe, potatoes are send towards the distilling setup buffer chest.

Producing Ethanol is a simple loop that fuels itself: Potatoes to Fermenter, Biomass into Distillery and Ethanol into storage + Liquid burning boxes used by Fermenter/Distillery.

Even the sideproduct (Distilled water) is situationally useful. You can use it to simplify the existing boiler configurations, as Distilled water does not cause calcification.

Naturally, our base grew and our power needs skyrocketed when most of the machines were up-tiered from bronze era. Old boilers were being smelted and repurposed as different machines. Ethanol was becoming more scarce, even with expanded farming space. This prompted us to go through the “Engine Fuels” crafting recipes, and this is where we found out about oil products.

Oil is the major component when advancing in GT6 tech tree. It is required for plastics and has awesome yields for power production: Butane and Propane in gas form, Petrol, Kerosine, Diesel and Fuel in liquid format. Last 4 are fully compatible with Diesel engines. We used oil extensively throughout LV, MV and HV eras.

This is more niche setup than Ethanol and Oil, but very powerful nonetheless. You can sometimes find strange white spots on the bedrock that irregularly output white gas. This is a Natural gas deposit. We got extremely lucky and found a large deposit (10-15 blocks that output gas) near our base. By surrounding the blocks and leaving them room to move towards single center target you can collect all of the gas being produced. Beware: natural gas flows upwards! Rotational pump can gather the gas.

As some of you might have noticed, mentioned methods rely heavily on the liquid fuels to produce EU/t power (Diesel engines → Electric dynamos → Battery boxes). We had few steam-producing setups with Gas Burning boxes, but these were too cumbersome for extended usage. By following the crafting recipes you’ll eventually end up finding the mini-bosses of GT6: Turbine and Dynamo multiblocks.

These are extremely powerful but equally hard to make. Each full multiblock requires thousands of units of highly processed materials (Stainless steel, Magnalium alloy, Annealed copper). After we understood the scale of these monsters, we actually created automation setups for producing each of these materials (more on that in the next post). For now, let’s have a look at completed Gas-consuming and EU/t producing setup.

Magnalium Gas turbine produces maximum of 8192RU/t, which is also the maximum input of Stainless steel dynamo (turning 8192RU/t into 6144EU/t). This setup is simple and very easy to understand: If you input compatible gas into Gas turbine, you’ll get out steady output of 6k+ EU/t. By converting the output from IV to EV energy (Transformer EV-IV) you can output the EU/t into Battery box filled with batteries. Waste (Water and CO2 Gas) are voided from the side of the multiblock.

After time passed, we made improvements to the design: automatic activation logic and backup Diesel generator cluster.

For a time, all was good. Natural gas, oil products and ethanol were used, energy network was kept at full and multiple high-tier machines could be run simultaneously. But the cracks were quick to appear: shuffling between different raw materials took time, running between natural gas deposits took time and finding oil took time. As our base grew even larger problems became even more apparent. No, this could not go on. And the search for better energy generation methods continued.

“hey, we saw that coal gas at some point, would that work?”

Yes. It would work nicely.

Coals gas is an excellent fuel for late game power generation, as it is very simple to make. Only things you need is Anthracite Coal ore, some water and crapload of machines.

There we have it, power generation used in TPSServer. I decided to omit solar power, water power and other experimental methods (even though at least solar power is being used here and there). And to note, Coal Gas is not the end-of-line method. As I think everyone knows, there are still some methods that are vastly more powerful and equally more destructive to come.

For a teaser, next post will go through intermediate contraptions, supporting machinery and logic-driven Crucible setups. Here’s a picture from the -1 floor of our multi-level processing chunk, named “The Pitt”. 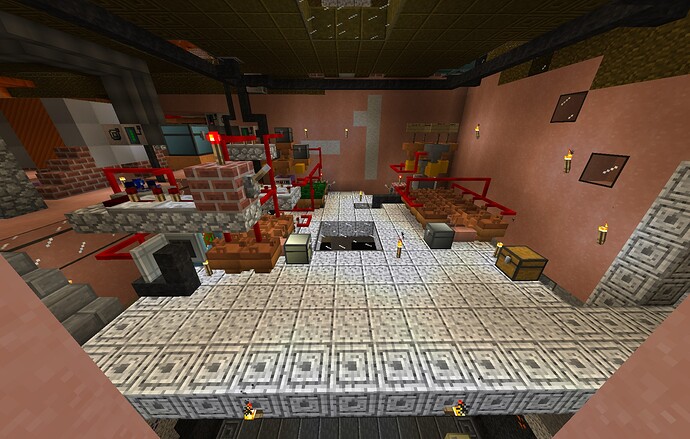 You can collect natural gas with just a vent cover. No pump needed.

You can collect natural gas with just a vent cover. No pump needed.

And by that you mean DRAIN Cover.

And by that you mean DRAIN Cover.

Yeah, I’m always mixing those up.

Items are collected into single chest, after which the items are outputted into BC Transport pipes. After a quick sorting with a single diamond pipe, potatoes are send towards the distilling setup buffer chest

GT6 Item Pipes! They auto-route and are less laggy and all! Plus there are long-distance versions that are lagless along those runs!

Still though, these posts you do are awesome! Keep em coming! ^.^