Hello, this is a picture-heavy post of our creations made in the TPSServer (private server, survival & no cheating, 3-5 players and almost a year of consistent gameplay).

Modpack is “GT6 Bears Den Adventure 1.0.1”, customized by including Thaumcraft and many supporting mods for it. 107 mods in total.

What are core gameplay materials? I define them as something you use regularly during GT6 play-through. Materials that allow you to create machines, make wiring, produce pipes, make chests and so on. Uniting factor with these are the large quantities that are required for advancing GT6 tech tree, for example moving from steam-powered to electricity-driven setups.

I decided to include few materials in this post, all of which require somewhat complex automation to produce in large quantities. For me, these four horsemen of apocalypse are: Aluminium, Titanium, Silicon and Tungsten.

This was the first one we smashed together. Aluminium is the core component for any MV-tier electric machine, and it is also a great material for chests, crafting tables, decoration and more. It still has uses in late EV era, as Aluminium cables support EV 2048eu/t voltage. Our base’s main electric line was created using this cable, serving very well through MV-HV-EV and still bit into IV era.

Note that this is not a closed loop, as last Electrolyzer requires some hard-to-get liquids. Luckily it uses them very little in the process, so hand-crafting them for later usage has not been a problem.

Titanium and silicon setups were created at the same time. We were advancing within GalatiCraft mod, and high-tier GT6 machines required large amounts of titanium (especially multiblocks, like Boiler). After a few tries we managed to create the following:

Interesting thing here was different inputs, as both Rutile and Ilmenite dusts could be used for Titanium creation. Violet Magnalium item pipe on the left (un-attached) could be connected if Ilmenite dust is used. Resulting Ferric Chloride could be run though Electrolyzer in the back to get chlorine back into the loop. Latest GT6 update changed this to include more processing steps, so we should remove this pipe and do some positioning.

Silicon has many uses, but the main thing for us was simply: Solar Panels! Nothing is free in GT6 (except water, and plants, and some more stuff I think) and this goes for power generation. Solar panels allow you to make consistent setups that require no upkeep, and with a bit of planning (batteries) rainy days will not be a problem.

Hydrogen separation from water is extremely energy-consuming task, and even slow at that. I most often deactivate that part (lever in the right) and use surplus Hydrogen from aluminium production.

Tungsten was a pain. At first, pain to find. With 3 people searching it took us around 3-4 hours to hit that sweet Tungstate vein in the overworld. Afterwords I think it could be enough to go to the End, gather End stone and mass-process it to gather those tiny piles of Tungsten Trioxide. But well, if you hit a tungstate vein you can congratulate yourself for a bit but the real work just begins there.

Tungsten processing is special in that it has 5 ores that are tungsten-bearing. Only tungstate is pure enough to go through the process described in the picture, others have to be manually processed to get that ever-important chlorine back into the loop.

This concludes few of the contraptions we have produced, but only scratches the surface when it comes to complexity of server’s creations. Few motivated players and a long time span allows creation of long-term solutions, even for problems you didn’t know were there.

As a sneak-peak, image from our central ore-processing chunk, fittingly named “Thunderdome”. Coming in the future. 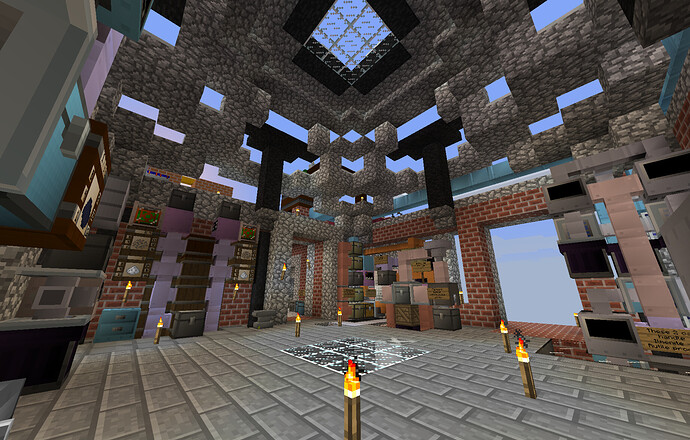