Some Ideas about Large Machines in Future

At present, there are five large-scale machines: centrifuge, distiller, boiler, turbine and dynamo.
@Gregorius has revealed that some large machines will be added in the future, so what machines are suitable for large-scale? I have some ideas:

Electrolyzer: Yes, I mentioned it a long time ago. It can be used for lossless overclocking and multithreading processing of materials that need electrolysis, just like large centrifuge.

Roller: You may need it when you need to deal with a lot of plates, etc. I think you can combine four or five rollers (wiremill may not need, because GT++ does this) into one and switch modes in some way (for example, rolling a plate into a bending plate in one mode, rolling four foils in another mode). They may use RU input.

Crusher: Processing a large amount of ore may be used, similar to other large machines, it has multi-threaded and lossless overclocking,When it works, it produces a very loud sound of rock breaking. for it needs KU has some doubts, because it does not seem to be able to propel such a large piston…

Mixer: It looks good, but it doesn’t seem necessary… Because high-tier mixers are multithreaded, lossless overclocking is less useful (if you don’t think it’s a waste of energy)… Nevertheless, they have more input/output sides, which may be better for automation… Because there are two kinds of mixers, RU and EU, I don’t know which one is good. The RU may seem more energy-efficient, but the EU looks more realistic (after all, the control circuit needs electricity)

Shredder: It may be useful when a lot of grinding is needed… After all, many materials have to be ground to continue processing, I am more confused about whether it should have one or two RU inputs… They should make as much noise as a large crusher.

There are no good suggestions for energy conversion machines at present…

GT++ is not compatible with GT6.

I’m not talking about GT++…… but GT6 may add large versions of many machines like GT++. I know GT++ can’t be compatible with GT6… I’m just giving you an example, because the bending machine in GT5 are one and the wiremill is another, so they are made into two different large machines.

I know GT++ can’t be compatible with GT6

Yeah I was mostly talking about the other guy with that statement, I think that large versions of machines would be a cool idea, because we already have the large centrifuge

Just was confused because you said, we do not need the wiremill because of GT++. Otherwise i agree with your post.

A multiple-blocks machine is more real and convenient.Some recipes have many kinds of items or fluid to output or input.It is a difficult task to make the lines automation.The single-block machines are usually awful when the density of cables and pipes is high.My line of trimethylsilane (GT5) is destoryed by the recipe that cells and fluid compete with the only one output port.If I use the AE network,the occupied space is big and the burden of mind(maybe hands,I use whitepapers to planning) is high(HaHa).The recipes that need /produce cells is a little unreasonable and the process of cells is hard to automation even I have AE.A multiple-blocks machine can prevent these things from happening because they have many buffer space and directions to output or input.
Also,some recipes,especially Electrolyzer,need a cathode and a anode.
Examples:(2NaCl+2H2O====H2↑+Cl2↑+2NaOH)(2KHF2==2KF+F2↑+H2↑)
Some devices(tower,filters,mixers) need to imitate the gravity or make rotation.The single block seems can’t afford the space requirement.
And it is easy to update or configure them.

In fact, because GT6 adds quadruple and nonuple pipes and extenders, the input and output do not take up too much space, but this will affect the flow of pipes and automation problems, so multiblock machines are still a good solution.
By the way, I found a GT5 extension mod called TecTech. Although it is obviously not compatible with GT6, some of its multiblock machines can provide some reference…

Yeah I hate how old GTs did the Cell Stuff, now that I have better ways of doing it. You always had to cycle a ton of Empty Cells in your System or had to have them in your AE-Network.

Multiblocks that are single-purpose or only have few purposes like the Distillation Tower do have dedicated Output Blocks, so you dont need the Multipipes there, but for everything else I would keep it bundled, especially since you have Filters and such anyways.

Thanks for your answer.

I drew the design of a large electrolyzer: 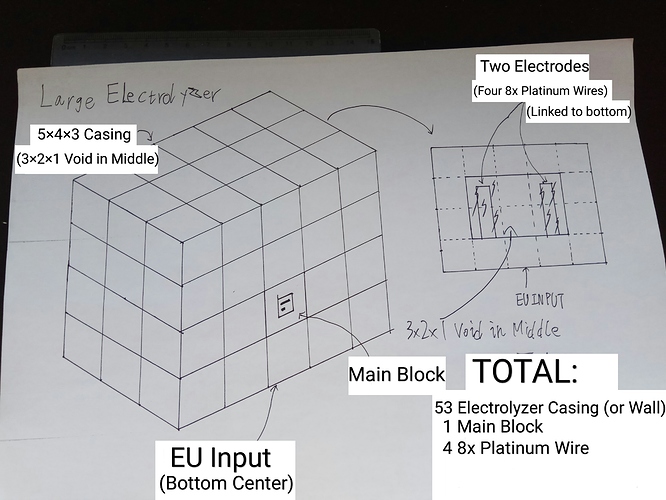 Hi there!
I’ve read the forums for a while and just got an inspiration thru Mr.Chen’s post. Here some thoughts regarding the large electrolyzer design.
According to Wikipedia electrolysis cell contains of ceramic vessel enclosed in steel casing, placed on insulation layer (maybe plastic, glass or some kind of porcelain). Graphite cathode is placed at bottom and coke anode on top. Low voltage DC (U < 5 V, I ~ 100-300 kA) is transmitted via steel buses.
So the large electrolyzer may be like: 1x3x3 insulation layer, then 3x3x3 ceramic-steel wall with a controller made of two graphite electrodes (or graphite and a coke one), HV transformer, 2 steel buses (8x wires), in and out pipes and a ceramic-steel wall (or dense st. steel casing).
It may be a bunch of to-add blocks but it’s just a (kinda realistic) sketch.

All GT6 machines are powered via “single” wire, so they don’t really have poles. And for making those bunch of machines and the whole power API should be remade (I have no MC modding experience so may be wrong). The best solution I can think of is to represent electrodes in multiblock controller craft, whole machine being made of “large electrolyzer part” blocks and powered with a “single” wire.

Fun fact is, I actually tried to power Polarizer up with different poles of two electromagnets from both top and bottom till actually read magnet’s tooltip “power in: any side but front and bottom”…

It’s just a few ideas, depending on what @Gregorius ultimately wants to do, and he often doesn’t spill details very early in case someone rushes to do more (unless he decides to add it next week).
Also, for large mixer, is RU or EU appropriate? Because mixer RU and EU are two kinds, using RU may be more in line with the rules, using EU is more realistic because the control circuit needs electricity… )

Yeah, @Gregorius is the boss here.
As for mixer, EU variant is basically a large motor with blades, is more compact and convinient, RU can be powered by one or maybe several motors… several RU inputs are too complicated tho, multiblock turbine will do.
Didn’t give it much thought yet. Does it even need a circuit?)

The EU powered Mixer is just more Convenient whenever you use Electricity, but it is only half as fast and wastes a bit of Power.

I propose the automated burner centrifuge that requires HU, EU and RU to operate and a button that the player needs to hit with a hammer.

In fact, industrial electrolytic production needs to consider many factors.

The first aspect is the electrode.Platinum or graphite electrodes are not universal.Although their chemical stability is high.We need to change different electrodes for different recipes.
For example,GT5u added the recipe of electrolytic refined copper.We need to use blister copper as the anode, fine copper as the cathode, and copper sulphate as the electrolyte.Electroplating also requires electrode replacement.In most cases, the electrode is inserted from the top.So we can change the electrode at the top of electrolyzers by a kind of block which named “electrode fixing groove”.EU access from them.These four 8x platinum wires can be removed.They represent electrodes that may seem confusing in some cases.

Second,we need space for ion exchange membranes or partition.They are important in many industrial electrolysis processes,especially aqueous solutions.It blocks the indiscriminate reaction between ions and gases,which can improve product purity or ensure safety(H2 and F2,you know).They can also be placed in the GUI of a kind of block that are called “Separate Room”.They can be mounted in the middle of the side to simulate their insertion.

Third,feeding port and take-up port are critical.We can design input ports at the top of electrolyzer for solid and in the middle of the side for fluid.Also at the top,it is the gases’ exit.The fluid’s exit is close to the fluid entrance.Because these settings,a little larger electrolyzer is needed.

Finally,the electrode should be set to a certain degree of durability,just like IE.Membranes should also have durability.If the durability of the electrode is exhausted, it will become waste.But the membrane can be eluted by chemicals in the reactor to restore durability.Also,according to the generation state of the product on the electrode.If they are gas or fluid,they can be output directly from the output ports.But if they are solid in some cases,they can(or should) be output together with the electrode,just like electrolytic copper.