So, at least Dwarf Fortress is a Game where I dont Focus all of my everything into it, despite it being a micromanagement Game, so I will still work on GT6 a bit. Originally I wanted to wait until the Steam Release, but here we are, in a Forest between a River and the Ocean, located somewhere on a Small Hot Island in the East, carefully prepared with the things I need, and some things I dont want to produce early on, and 4 Turkeys to lay a plentitude of Eggs, and the wiki knowledge on how to actually manage my Crops (Sweet Pods in Spring, Plump Helmets in Winter, and Pigtails/Cavewheat in the other two Seasons). 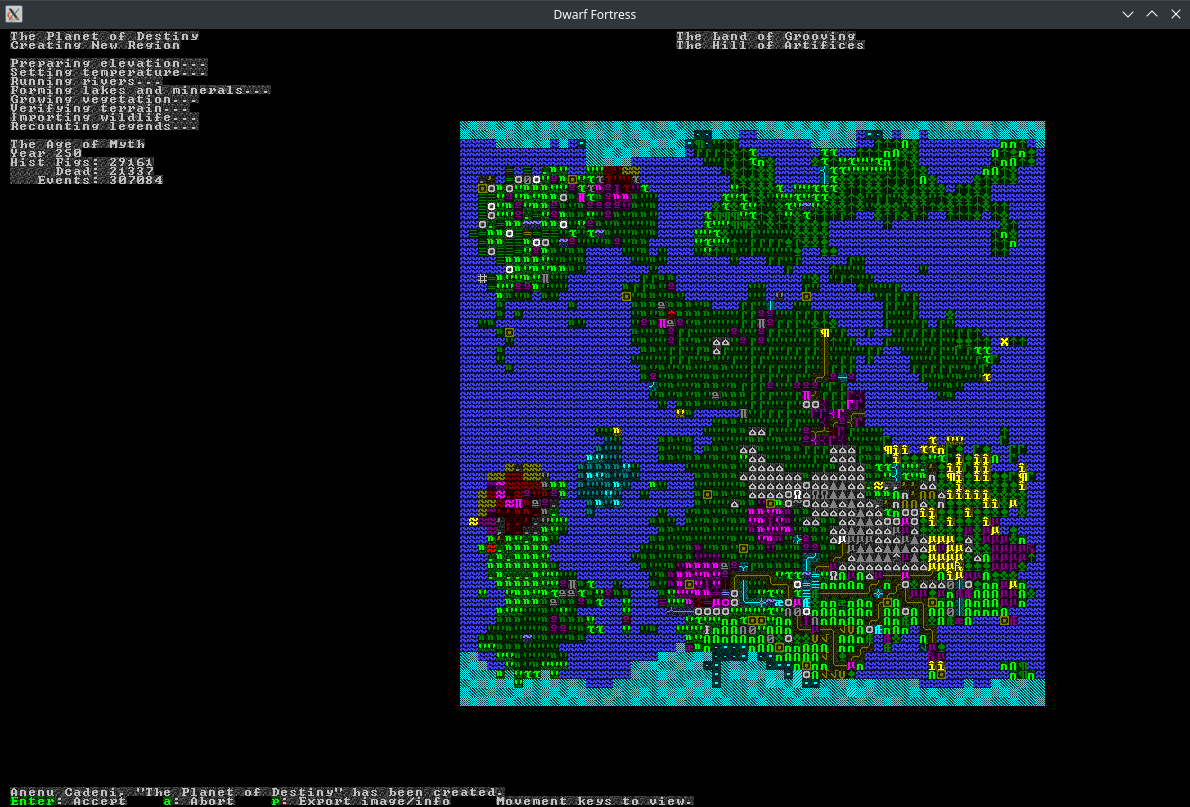 The Yellow X in the west marks the Area where I went, on that second Screenshot I simply didnt hit the correct Frame to have it visible there too. I only have dwarven Neighbors according to the Neighbors List. 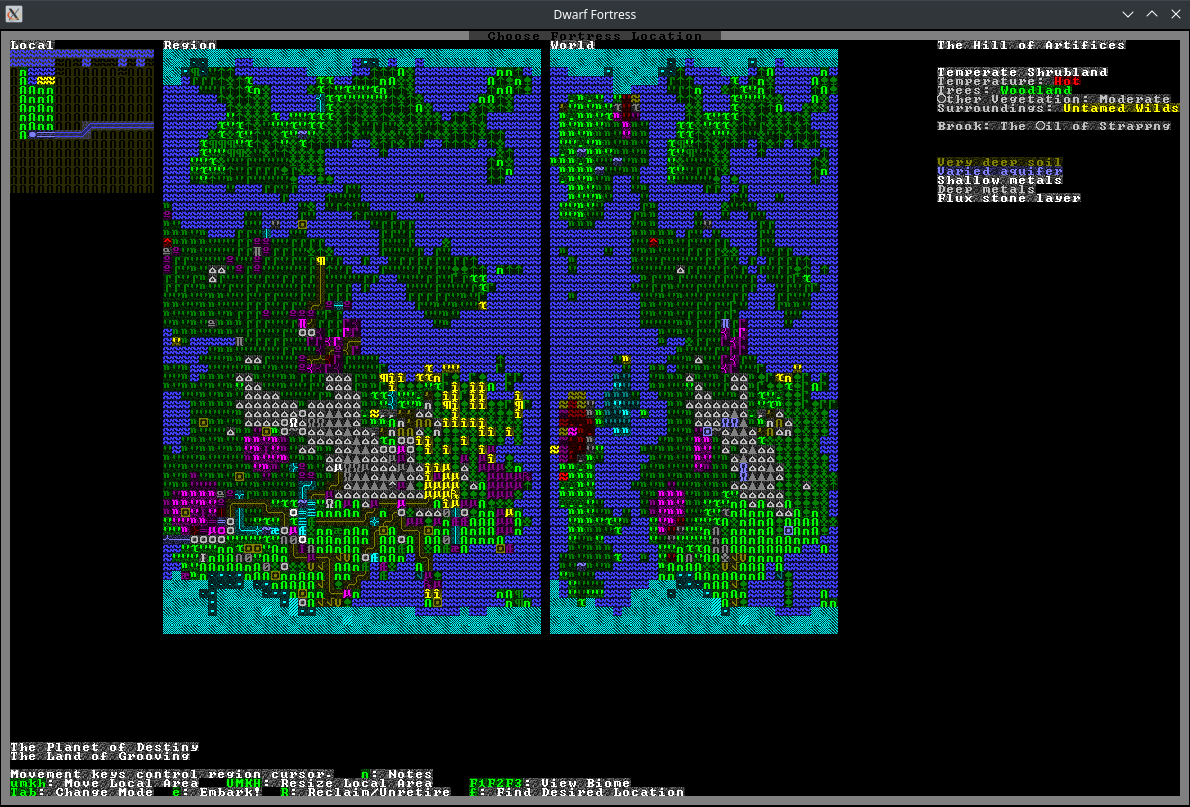 I went for a 4x8 Embark because I wanted both the River and the Ocean on my Map. Last time i regretted an 8x8 Embark due to Lag, so this should be fine, especially with my newer Computer now.

My second Fortress exists in a different World from 2 years ago, and I dont think I will go back to that one, because nothing got done due to mismanagement.

My first Fortress, which was in that same World as the second, well Were-Gilamonsters got that one. Had lots of “Fun” there. Yes Gilamonster is a real life Animal. It has the word monster in the real name, dont know why.

Well then, time for me to dig a Hole!

So shortly after the first Migrant Wave. 13 Dwarves so far. 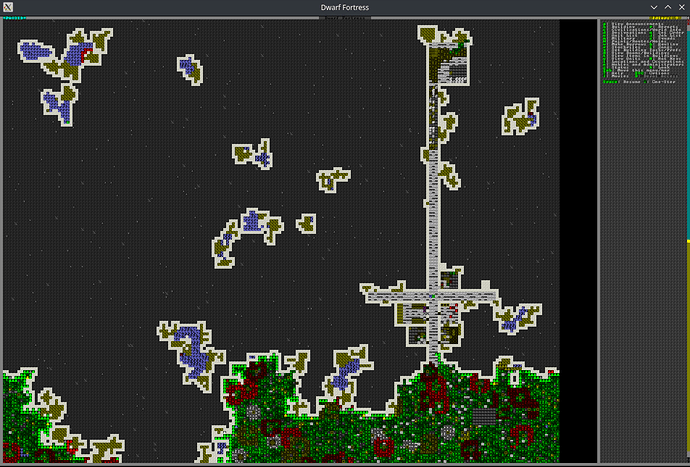 Food Production is stable now with that one 3x3 Farm Plot that currently only uses 5 Seeds, since it is year 1. The Seed Stockpile is not allowed to use Barrels because Seeds are already a Bag thing, and 2 bags can contain the entire Fortress-wide Seed Cap of 200, on a per Seed basis. Btw I did effectively remove the “all seed types combined” Cap by setting it to an absurdly high value, since that Cap doesn’t serve any purpose in this Game, and is also a bit bugged.

There is no Clay in case you noticed, but I am pretty sure I wont need Pottery to run this place.

Ah yes, in the category that doesn’t appear on the main forum thread so don’t normally see them. ^.^

You trying to hide your new game addiction?

Oh right I forgot that Off-Topic doesn’t show up on the “recommended” List. Also I linked this to you TWICE so far.

Anyways, so far everything is going relatively well, had a Clothier go insane because I couldn’t get him Silk for his Fey Mood. Injured two currently useless Dwarves to the point of me just expelling them because I did not use them yet, and they were very slow. Also one of them was traumatized and kept interrupting others all the damn time…

Also I linked this to you TWICE so far

Which is how I found it, lol.

Aww, they just wanted some friends!

Argh, what am i gonna do with all those dumb Migrants, I already have more workforce than i need for now! People just flow in way too fast!

I got a Turkey-splosion after just one Egg hatching attempt. Had to move those around to a bigger Room.

Setting up Jobs with Managers is such a pain, almost everything I do to try make it work results in cancellation spam, because conditions are not checked before adding the 1 Job to the Workshop… all I can really do is setting up a monthly “do 10 of these if conditions are met” thing, but that isn’t really nice…

Edit: Turned away a Necromancer Migrant, because it is not a safe thing to have around when you butcher Animals. 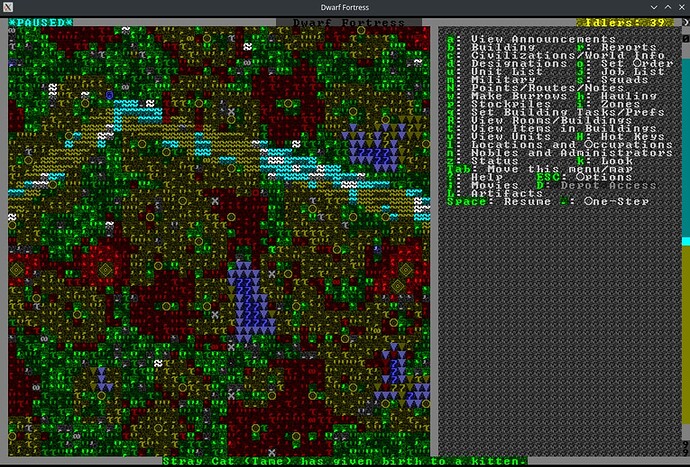 Well look what happened there… 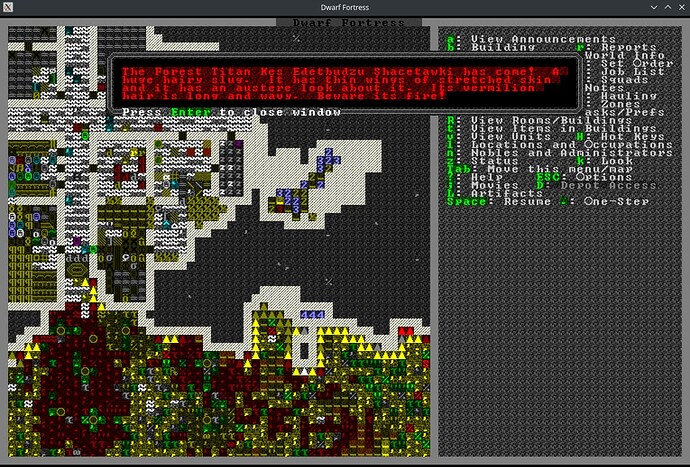 ¾ of my population died, and everything is just a huge mess. I’m gonna abandon this place, and go for a Cave/Cavern Embark next time, without any useless junk like Seeds, Anvils and such, and with a Dwarf that is proficient in wielding an Axe and Armor, to mow down any opposition. Also I will disable Migrants, I am a slow player so 7 Dwarves and their Children are gonna be enough.

New Fortress new Management. I only have 10 Dwarves (two of which are Children, yes i reduced migratory pop cap), and everything runs smoothly. I learned from that Roofing Mistake and went to a Cliff in the Mountains this time. It was hard to get the Farms inside, but a water bucket brigade fixed that.

The full Copper Armor and the Steel Battle Axe (including proficient dwarf) were kinda useless as I did not get to fight. There was two “Sieges” both of which instantly retreated within one tick for some reason. One was regular, the other was undead. I did not get the forces of darkness yet, but that one is also possible.

Because that “Bodyguard” was so expensive, I did not have any Booze or Food to start with, just the Stuff I could gather from the surroundings. Things to bring next time may include Bags, lots and lots of Bags, because it is annoying to make them for all those Seed Types I’m gonna “gather”, before I have anything set up to make Clothes. 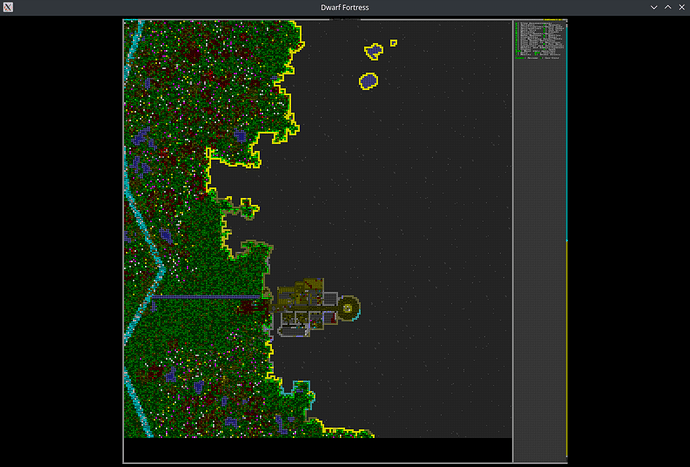 As long as everyone hauling Wood or Water can get inside in time, my Fortress will be Safe behind a Lavaproof Mica Drawbridge. Cant say that about that Goblin Liaison or the Yaks though.

I did set up two Quantum Stockpiles to store my Logs and my Stones, because those two are a real pita to store, especially for long term.

Also who knew that cooking all those random garbage surface Crops yields a TON of trade value, more than Gemstones by a long shot.

Lets hope this Fortress will actually last and not succumb to Management Issues.

So I am being invaded. Too bad my Door is closed. 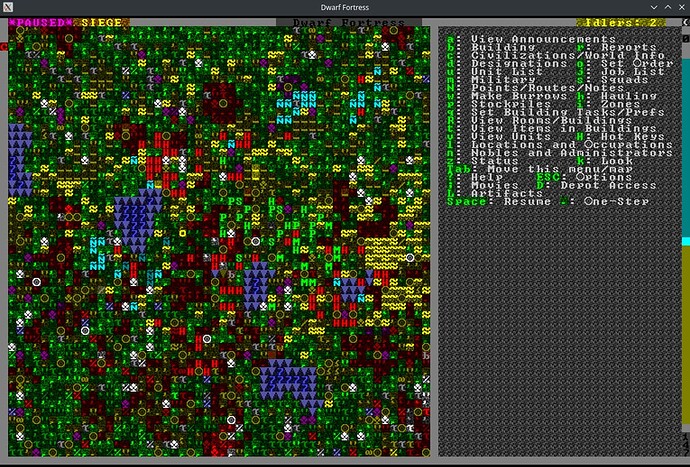 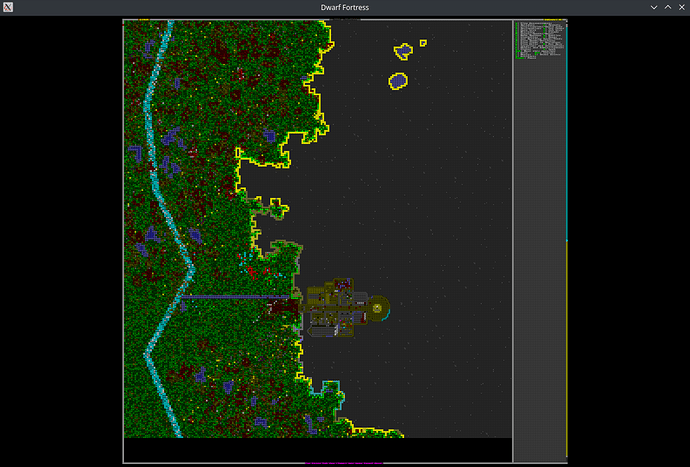 I need to find a way to build a Floorgrated U-Pipe to fill my Well with at least some Water. Those cancellation Messages for “give water” get quite annoying…

Decided to post some Screenshots again, nothing terrible happened so far, the Sieges are normal occurrences in the Area I live in, due to the Tower being closeby. 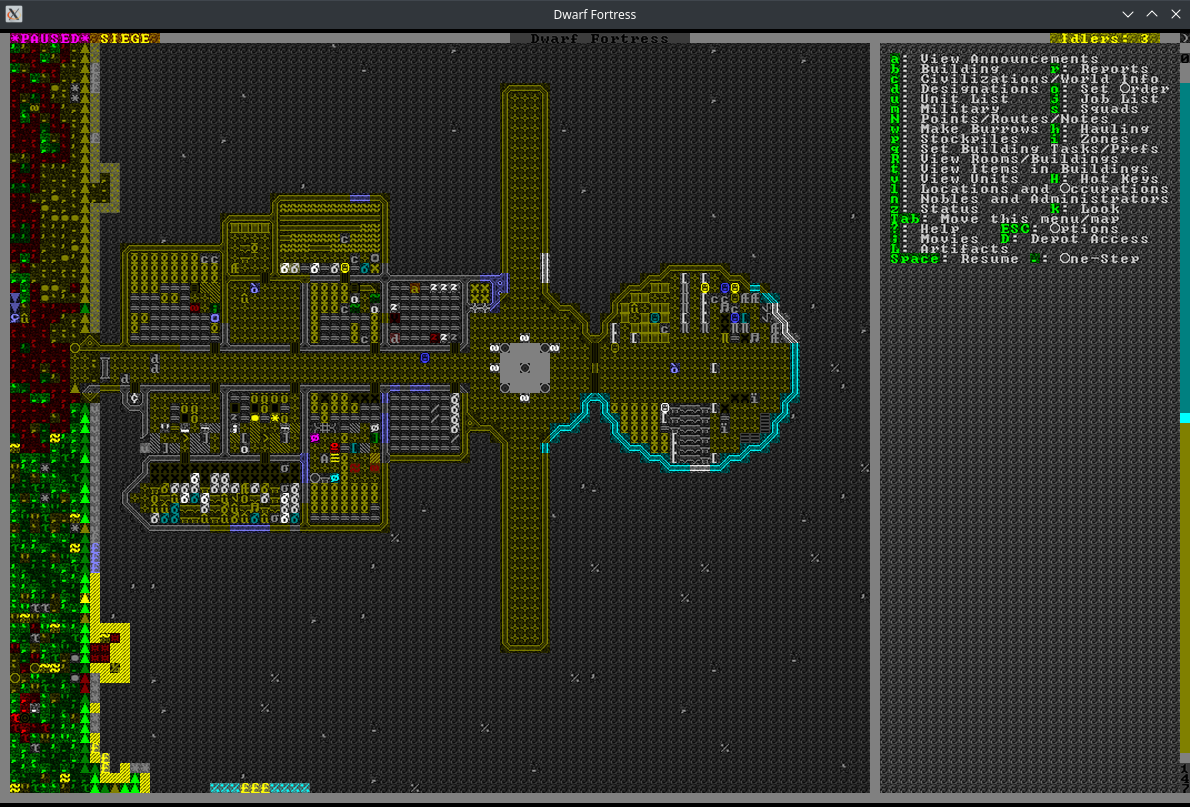 Screenshot_20220929_2052391190×807 365 KB
There is a lot of Wooden Pots with “Masterpiece” Food in the top left corner, while the Booze is Stored in Wooden Pots at the Still’s internal Quantum Stockpile itself (If it has nowhere to be stored, it will just stay inside the Workshop, also the Pots to the left of the Workshop are for the Input Crops).

Some Food and Booze is stored in the shared Living Room to the right, because overlapping Rooms penalty only gets applied once even if you have 10 people living in the same Home. This does have the buggy Side Effect of Cabinets not working, which is why all the Clothes are laying around everywhere, which in turn is sometimes fucking up the Food and Booze Stockpiles in that Room. 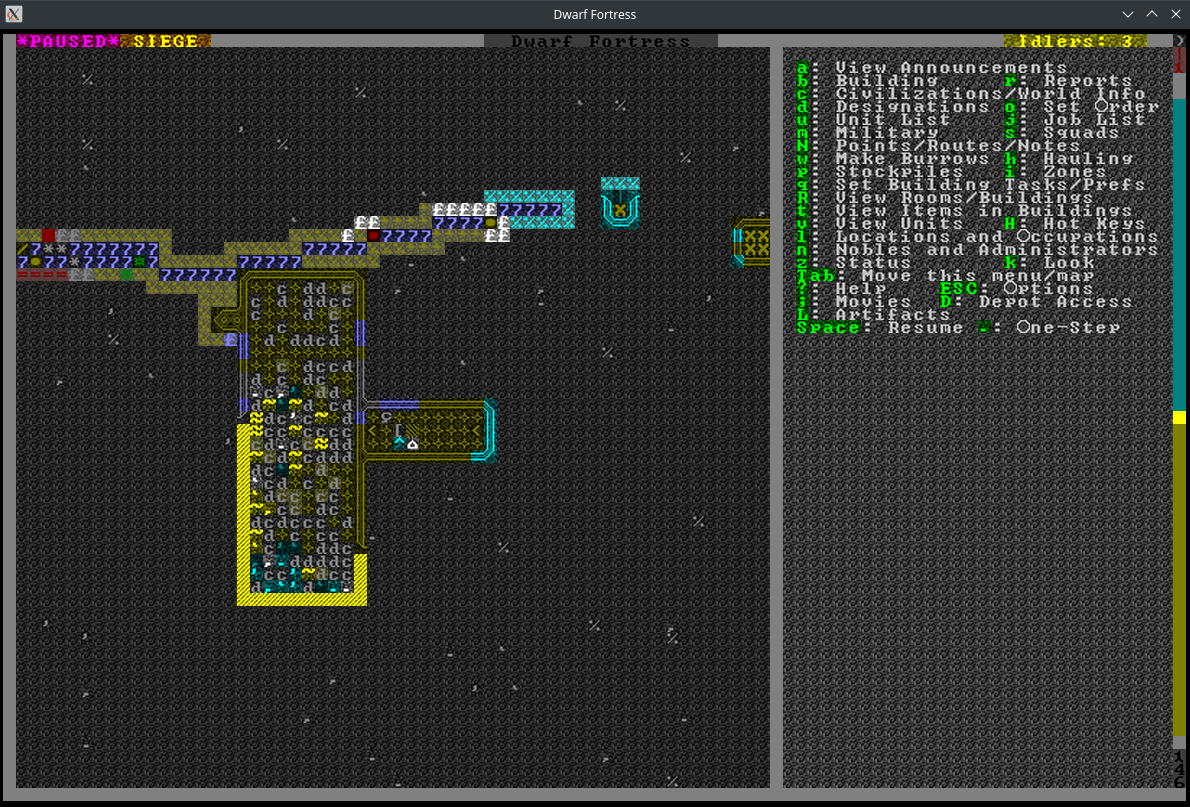 If I knew there was Sand this closeby I would have built my Farm down there instead of using irrigation.

The Water Pipe is this diagonal-ish thing, because I wanted to give the Dwarves more time to run away and build a Grate at the U-Pipe. 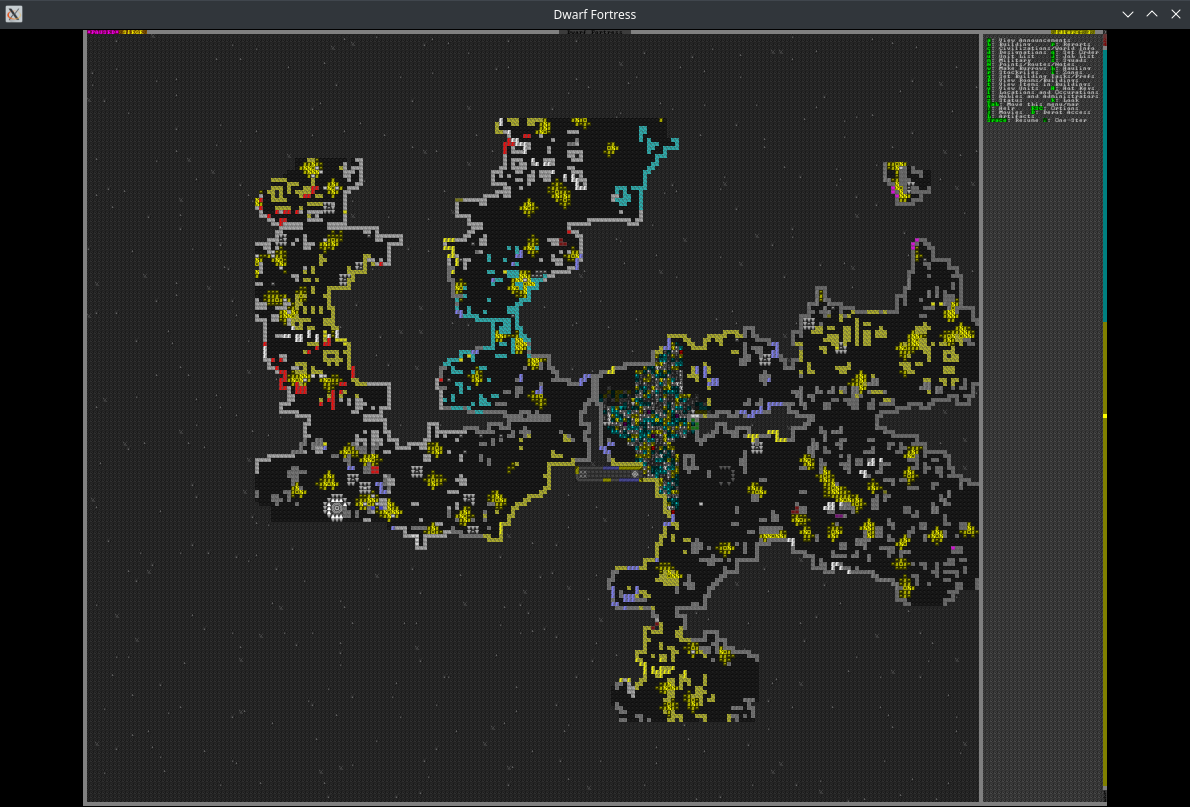 Screenshot_20220929_2052581190×807 75.1 KB
And here is where I breached into the first Layer of the Caverns. Apart from a Giant Toad somewhere down south, the place is perfectly peaceful, for now. These Mushroom Trees provide very little in regards of Wood… I hope that Siege finally gives up so I can go outside again to chop some normal Trees, but until then I am gonna run some Water Piping down to the Cave Area, because I am about to build the real Fort down in that Area.

I also already did put 4 war dogs at that entrance Drawbridge to guard against potential intruders. And sending out Cats for exploring was fruitless because they all prefer being around my Dwarves, and so they wont even go into the Caverns. Maybe I need to butcher some Cats so I can send newborn Kittens down there instead, those love to roam around in dangerous terrain.