How much EU/t does the lightning rod produce?

Hey I was wondering if anyone has done some math or some testing to find a rough estimate for the EU/t produced by the lightning rod? Assuming no sleeping to break weather and averaged over long periods of time of course.

I dont think I can reliably answer this one, because not only would i need to calculate the randomness of weather, but also for how long the weather lasts overall. And I dont know either if those values.

Anyone else know this one more precisely?

Yeah I tried to figure those values out but from the extremely limited information on Minecraft wiki you get something like 0.5 - 1 day duration with 0.5 - 7.5 day pause between rainstorms. Assuming it follows a normal distribution: 0.75day/4.75days (delay+duration) = 15.8% uptime on rain. Minecraft wiki also gives a figure for the rate of lightning strikes 1/100000 / tick / chunk. Problem is there’s no figure that I could find for how often rain becomes thunderstorm… However I also don’t know how the lightning rod itself works, does it check for lightning within a certain amount of blocks? If that’s thecase how does it work in rain at supposed 10% efficiency?

Assuming something like 10% of rainstorms are thunderstorms (conservative guess I think) there will be thunder once every 66 Minecraft days or every 22hours, and assuming the rod checks 1 chunk for 0.75 days (18000 ticks) we get 500mil EU every 121 hours or 57EU/t. In the case where 50% of rainstorms are thunderstorms we get 285 EU/t. In any case depends heavily on the mechanics of the lightning rod. (All assuming it just checks its own chunk for lightning strikes)

Can you tell me what calculations the rod performs ?

However I also don’t know how the lightning rod itself works, does it check for lightning within a certain amount of blocks? If that’s thecase how does it work in rain at supposed 10% efficiency? 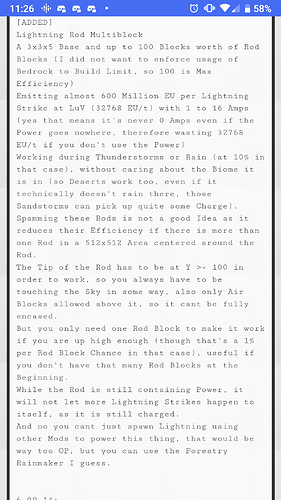 I mean I thought I already had? To me it doesn’t look like you described exactly how it counts lightning strikes you just say ‘600 mil eu per lightning strike’ and 1% chance per rod block. None of that makes any sense without knowing the area its checking for lightning strikes? Or is if it’s chance based is it chance/tick what’s the deal?

Your Screenshot literally contains the entire description of what the Lightning Rod does. Why do you insist on the thing scanning for Lightning? That doesn’t make any sense. That would mean you could just spawn Lightning Strikes with a Mod and generate infinite power which would be OP as fuck.

No it doesn’t lol I just read your code, it’s not obvious from the changelog that the lightning rod literally just uses it’s own random generator and only cares about the state of the weather, like your code literally generates lightning strikes for aesthetic purposes and then adds 600 mil EU to its buffer. Your description is a bunch of conditions for making it work and something about it’s efficiency but it doesn’t describe the base of the randomness:

This is not stated anywhere that the randomness is 1 in 10k per tick using 100 rod length or 1 in 100k per tick in rain. Also the diminishing return function on multiple rods increases the tcount variable by 1 for each additional rod within radius 256 but it starts at 1 so the rng(1) is a 50/50 baseline ? So I guess the optimal efficiency is 1 in 20k per tick for thunder 1 in 200k per tick for rain. So 30k EU/t in thunder 3k EU/t in rain (not account for time it takes to drain the rod (max speed 58 seconds roughly?)).

Honestly man I don’t see how it’s obvious that the rod produces lightning itself and is just tick based randomness when your description is “Emitting almost 600 million EU per Lightning strike…” and “While the Rod is still containing Power it will not let more Lightning strikes happen to itself” , the “Happen to itself” really makes it sound like there’s external forces at work I would not have known it if I hadn’t read the code 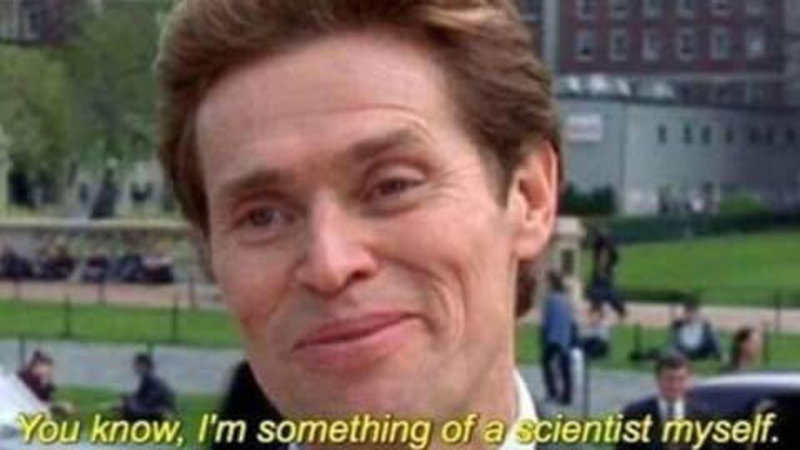