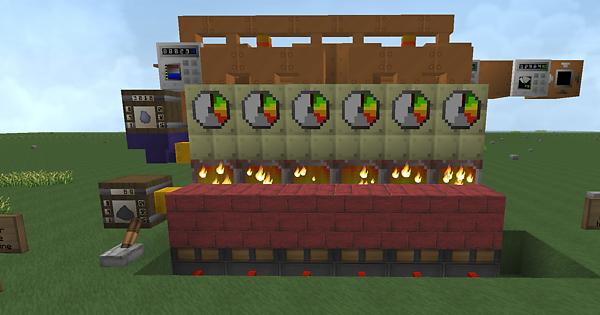 Made while trying to explore the exciting new options using gears and axles to transmit power!

Gears and axles may be my new favorite early power method. Greg has used similar logic to his power systems (ie: electricity) in that mechanical power outputs in packets. Each steam turbine puts out 16 RU/t in a single packet. The gearboxes combine those packets into a main axle carrying the combined power of 16 RU/t * 4 packets totaling 64 RU/t.

The error margin for machines isn’t just for single engine source input. For instance a Rolling Machine wants 32 RU/t and accepts 16 minimum to 64 maximum RU/t. It can accept 16 RU/t * 4 packets, or 64 RU/t * 1 packet. This means that you can simply split power between machines without loss.

Next step further down the line is to use custom gear boxes to divert power to a single machine or task. I’ll have to use a wrench to connect/disconnect axles to the gear box, but essentially I can run as many parallel machines as I have packets provided there is enough total energy.

This appears to be much safer and more sane than a long steam fluid bus. I’ve had many issues with fluid buses and branching, while maintaining enough steam to run multiple machines.

I don’t know if it’s my ad block or what but wow imgur is easier to read than it used to be!

Fluid issues mean these are connected as 3 boilers per 2 engines.

Originally I setup 6 boilers to a single bronze pipe to 4 steam turbines. It produced 30-40 RU/t. I divided it into 3/2 and it works.

It’ll balance out in time though, lol, just need to build a buffer first.

Hahaha, no it wont balance out, that is the Issue, it will flicker between two distinct states which are not balanced and wont ever balance.

Well fix it! But that’s not the balance I meant, I meant the flowrate would balance, not the values it stores. ^.^

Well fix it! But that’s not the balance I meant, I meant the flowrate would balance, not the values it stores. ^.^

Neither type of flow will ever balance, and its unfixable for the pipes that already exist. It would break previous Mechanics, we already talked about that.

Make a new pipe type Could even do a pressurized pipe that ‘teleports’ things like item pipes to all destinations equally’ish by hooking up a KU pressurizer to it or so to ‘power’ it.