I’ve been using MTutils to edit machine output recipes in GT6. Now due to a MTUtils limitation every time I reload the game (and thus the scripts), all gregtech machines (from burning boxes and smelters to even crucible molds and funnels, without exception) are manually hidden from NEI without me being able to look them up.

It’s quite a problem and a hassle to deal with, since sometimes I might need to switch between worlds in creative mode. The only way around this is to actually disable MTutils.I’m using it to disable a potentially exploity recipe to electrolyze voidmetal into tungsten, among many other things like shredder recipes to recycle some machines and some custom recipes.
Is there a way around this? I know for a fact other people have the same problems (here in the forums a guy points it out in the MTutils thread and on curseforge one of the most heavily scripted GT6 packs [https://www.curseforge.com/minecraft/modpacks/gregorius-hexii-artorus] also says testually that

Be aware that some of the MineTweaking I’ve used cannot be "re-load"ed, and this also means the whole minecraft instance needs to be closed and re-built in order to switch worlds. Sorry, that’s just how MT works.

Since this would be literal hell on servers and a major annoyance in singleplayer already, is there really no way to actually fix this or am I doomed to check all recipes online whenever I need to reload my save for one reason or the other?

I fear there is no way to fix whatever MTUtils does without asking the MTUtils Dev for it.

It is a wonder that you can even run another Singleplayer Game without relaunching the Minecraft Instance, because I certainly cannot do that on my instance even without GregTech.

And there is no Recipe to turn VoidMetal into Tungsten so what exactly do you disable??

I meant I can’t even reload a world more than 2 times, on the third try I unerringly tend to crash and the game won’t even let me even create new worlds and the launcher will freeze unless i kill it.

@Gregorius
Ok, I disabled the scripts and found it.
Not only you can electrolyze a voidmetal ingot to get a small tungsten dust (effectively as I said turning void metal to tungsten) but also turn manasteel into steel again by electrolyzing it. 8630 was actually steel dust, that’s the reason I had it in my scripts.
So in general both pretty big exploits. You can transmute iron into steel cheaply (manasteel is just mana-infused iron) ages before you can get a smelter and turn voidmetal into tungsten, effectively breaking the entire processing chain into just a single item by the time you reach MV, which I don’t think is intended.
Here’s the screenshots: 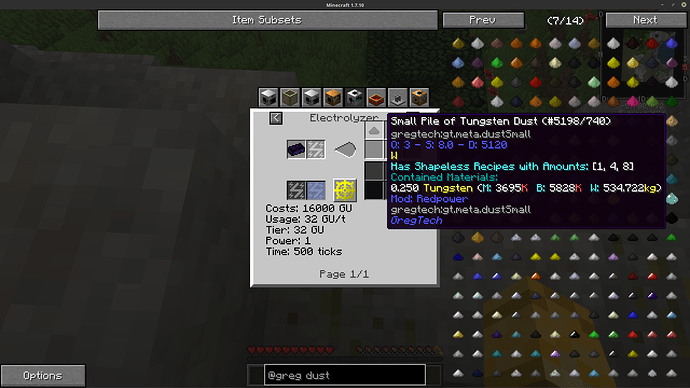 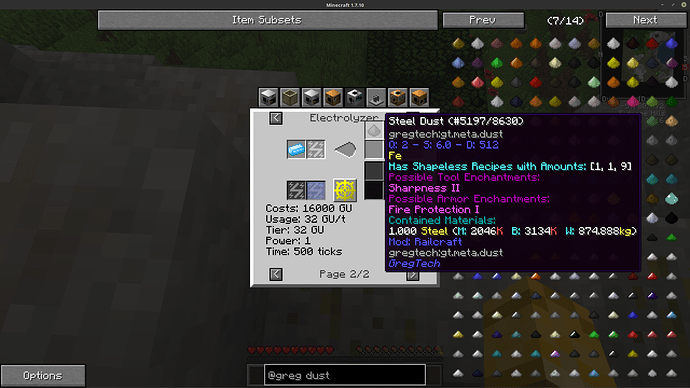 I think I can deal with deleting MTutils, considering the pros and cons, if these two exploits are fixed. Do you think you could actually turn manasteel into iron and voidmetal into obsidian dust or something?

And yeah, I can’t even reload a game more than 2 times, on the third one I unerringly tend to crash and the game won’t even let me even create new worlds and the launcher will freeze unless i kill it.

turn Manasteel into steel again by electrolyzing it

Not a GT6 Recipe, I don’t know who the fuck added it, but it wasn’t me, and I doublechecked just now.
Though Steel is easy to get with current up to date GT6, so it isn’t a big exploit (or exploit at all) to have Iron to Manasteel to Steel.

What Mod adds a Voidmetal to Tungsten Recipe?! There is no GT6 Recipe for that!

Got it, thanks for the input. I’ll try to deal.

@anon96293485 okay I asked @Qwerty and he said you can turn off Chemical X Stuff in the QwerTech Config.