This sounds awesome! And it came just in time - my current project was to build 4 of the multiblock generators, which will now be gas turbines instead. Can’t wait!

Will have to wait on more detail, but I have a suspicion that these will also be better suited to powering the bedrock mining drill than the multiblock steam turbines (due to the very out-of-game issue of not wanting to chunk-load too many mostly empty chunks just to keep a remote drill reliably supplied with clean water… I’m actually trading game resources for real-world hardware resources right now, running my drill on electric motors…)

Yeah,Gas turbine is really good, at least it can save a lot of things, no longer use gas burning box - > large boiler - > multiblock turbine - > multiblock dynamo for gas fuel generation. I first saw the “Turbine: xxGU/L” item in some gas-fueled tooltips, which I thought was compatible

In addition, some liquid fuels have the “engine: GU/L” clause in the tooltips, which may mean an combustion engine? If so, what is the combustion engine of GT6?
I’m a little concerned about how gas turbines are ignited and how they look different from steam turbines… Can it also export exhaust gas through nozzles? Although this is a basically useless function… I wonder if GT6 will add plasma turbines,like the GT5U…

Hrrm unsure if Nozzles would realistically work, the thing outputs quite a bit too much of Exhaust to just go there from time to time and use a cell or so to just dump it in there.

The Engine was indeed supposed to be a Single-Block Combustion Engine like in older GTs. It would emit RU and be very useful due to its compactness and mobility.

And the Gas Turbine looks identical to the Steam Turbine Multiblock, so why you say its different. XD

It also has an internal ignition for now, though that might change.

It also has an internal ignition for now, though that might change.

Interesting - is that redstone triggered or just a case of connecting/disconnecting fuel?

Just the Fuel Supply, though you can stop it using a Controller Cover too.

The problem now is that low heat value gases (such as methane and hydrogen) consume too fast to sustain their work, while high heat value propane and butane are mostly used to cracking to produce the plastic, so it’s a bit troublesome… Will more gas fuel be added in the future?

I will give it a solid “maybe”

How much plastic are you using? A typical light oil spring cluster provides enough propane/butane for a full stack of plastic pulp in ~5 mins, and that’s more than I tend to use in several hours… 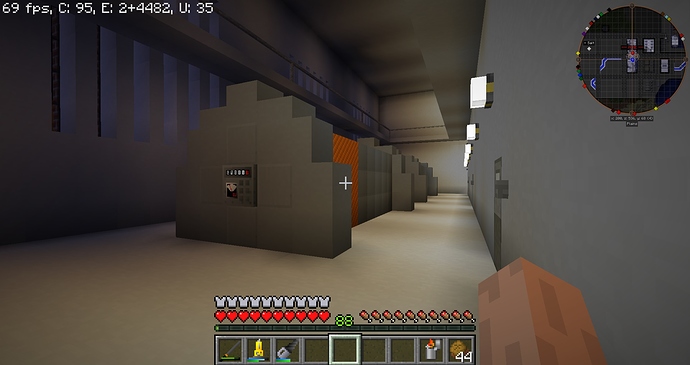 One of two turbines to be installed in the South Turbine Hall (concrete placeholder for the second in the background). Another 2 will go in the North Turbine Hall. Limiting factor is how long I can stand to anneal copper at a time… (if anyone has managed to automate that in a way that doesn’t either explode or pour out unannealed copper I’d love to see)

I have to say, these turbines are considerably more powerful than I expected! For fewer materials, higher efficiency, and easier automation I’m getting 3 times the power output expected from the steam turbine. Granted, it burns through fuel at a shocking pace - just briefly testing and fine-tuning the automation I burned through over a million litres of butane… It also means that I’m going to have to strip out and rewire half my base if I want to make use of that much power, and lay a more expensive high-capacity fuel line.

One request would be some way to limit the output to the nominal 4096 RU/t instead of the maximum 8192 RU/t, which makes using it to power a centrifuge or mining drill wasteful. Perhaps with a selector tag?

One request would be some way to limit the output to the nominal 4096 RU/t instead of the maximum 8192 RU/t, which makes using it to power a centrifuge or mining drill wasteful. Perhaps with a selector tag?

@Gregorius - is the silence a “no” on this one?

The Silence means: DON’T EDIT YOUR POST AFTER I HAVE ALREADY READ IT!!!

How can you expect me to answer a question after I already saw your post and even given it a Like? Typically me giving something a Like means “I have read it, and its not a bad post” (yeah I am loosely giving them out, because that’s usually a good thing).

There is no Edit Notifications so I cant know when someone edited something.

As for Limiting the Output, there is Planetary Gearboxes for that very purpose, you should know about them.

The Silence means: DON’T EDIT YOUR POST AFTER I HAVE ALREADY READ IT!!!
There is no Edit Notifications so I cant know when someone edited something.

After I built one of the new gas turbines I tried to leave a little feedback in a post on the thread I created a few days ago, but after typing out the post I wasn’t allowed to submit it as the last post in the thread was one I had left the day before. My only option was to edit the new post into the existing one.

I guess I don’t understand how the gearboxes work then? I thought they were like transformers in that they maintained the same total, just split over multiple packets. Can the gearbox actually cause the turbine to output (and importantly burn fuel as if outputting) 4096 RU/t?

And I hadn’t forgotten about the planetary gearboxes - you’d need them to power the mining drill anyway, as you’d need to split 4096 RU/t four ways as each face of the drill can only accept 1024 RU/t.

I’m not totally thrilled by the idea of running the centrifuges in pairs, but I suppose I would if given no choice. But I can’t see how I’d fit two mining drills onto the same deposit so that it would actually be worth doing.

Just found this in the changelog:

If you want to use this with a Bedrock Drill, remember you can downtransform the Power and also inject it into multiple Sides of the Drill.

Just to confirm, because it wasn’t completely clear before:

If you do this you waste half of the power output, yes?

No Waste if done right and spread over two Input Sides in this case.

Ok… I think I see what is going on here…

I was reading the changelog as 4 sides times 1024 RU/t each. Also a slight tooltip inconsistency compared with, e.g., the shredder.

4096 RU/t per input face makes things much easier (and potentially up to 16 times faster than my EV electric motor powered tests!).