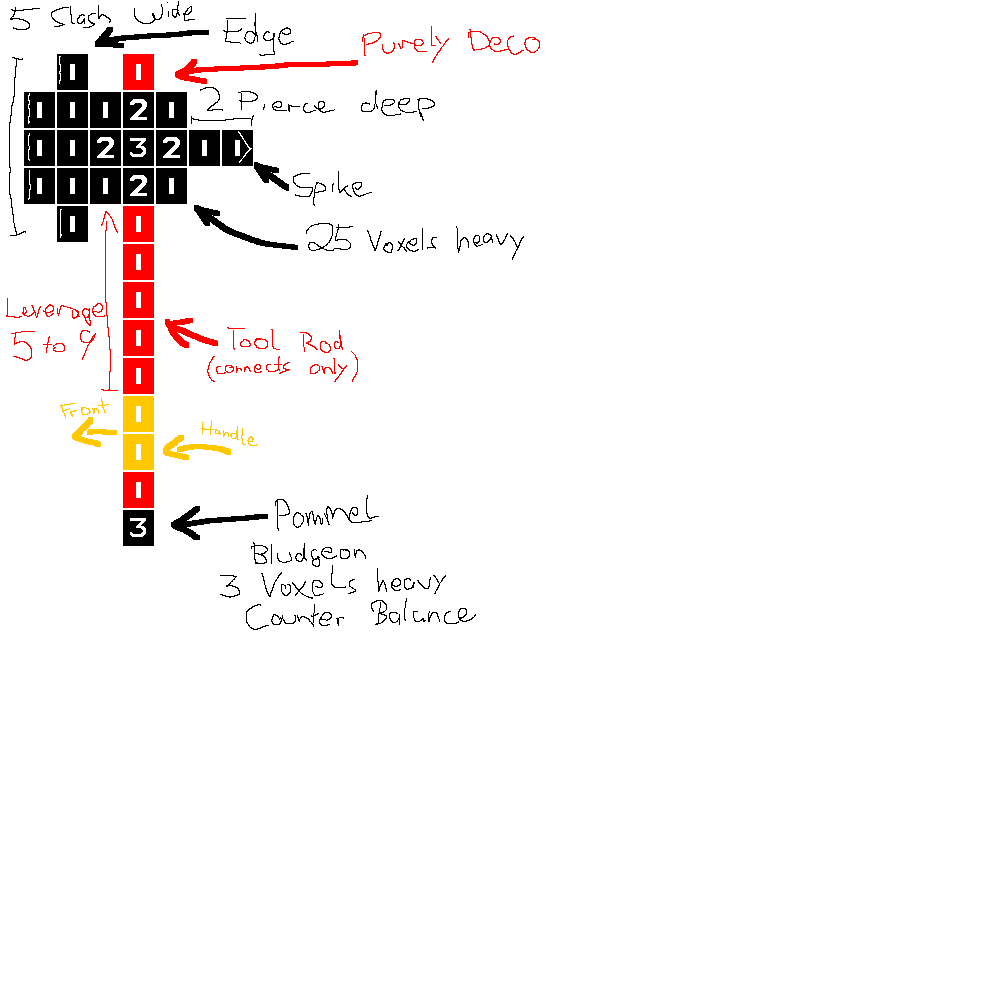 So I decided to randomly draw a mock up of a small Axe as an example of how different parts on a Tool can act. Note, this particular Axe would be very tiny, like half a Minecraft Axe kinda tiny.

I am not sure how I will handle the density of the Voxels, maybe it’s just thickness as in how many you place on the same plane. But I will only allow 1-Dense Voxels to have Pierce or Slashing Damage, so you dont end up making a perfectly flat looking Hammer that slices you up. You need to have visible Spikes on that Hammer if you want that!

Also not sure if I am going to allow multiple edges on a single Voxel, just for being able to visually even it out. Same goes for combining Spikes and Edges, not sure on those ones either, especially if the piercing distance ends in an Edge.

Tool Rod Parts only really connect the Tool Materials with each other, so they don’t usually play much of a role except for increasing Leverage for cheap.

The Tool Handle(s) decide(s) how big the Hand is, where you can hold it, if you can wield it with two Hands at a time, if your Tool has a more diagonal Style or a more straight Style, where the front of your Tool is located, and if you can just turn the Tool 180° to either use the Crowbar side of a typical Pickaxe, or turn the Tool around like spinning a Staff.

You for example CAN use a Sword to chop a Tree, but I don’t think the weight balance and everything would make the Sword a good choice to do it fast. The Piercing point at the end of the Axe I mocked up would be able to mine Stone too, just not very efficiently compared to a more pickaxe-y shape.

How I will end up calculating the whole thing requires lots of testing, I don’t want to encourage making the one Tool to rule them all, but combining two Tools together like for getting a Hammer-Axe should be trivial, especially since they are similar. 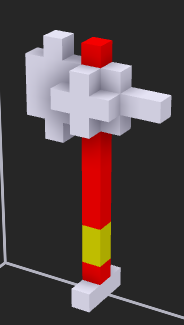 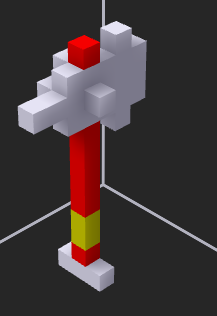 This particular Axe, where I totally did not think of the repercussions of using “2” in an uneven space, yes that could be how it looks like. The Edges and Spikes would be more visible though.

But yeah, all Tools would be Custom, with only NPCs and Loot using Default looking Tools. Well, and people too lazy to design their own. XD

What are all the tools included? Tools such as saws or wrenches may not be easy to judge, and some tools may contain mechanical structures (such as monkey wrenches).

I would recommend having the voxels not be cubic (1x1x1) but rectangular with one dimension being smaller than the other two to better present the “density” dimension (for example 1x0.2x1).
This would allow things to look better and more diverse, players could for example carve a symbol into the side of an axe head if they wanted.

The crafting of those parts would also be a little better with a flat side. I once did a prototype for a smithing system for the game Vintage Story, which would have allowed crafting of such voxel shapes like tool heads. The prototype is standalone and not a mod for that game so you can try it: https://cdn.discordapp.com/attachments/351624415039193098/372770900799389696/SmithingPrototype.zip

You can just paint the Voxels if you want Symbols on the Tools.

And the Tools do have to be compatible with the World Rendering System, since all of them can be placed in World.

As for a sense of Scale, each Voxel would be roughly 3x3x3 cm³ in size.

Modeling the Tools would be either some other GUI or something involving using Clay to Model it. Unsure how that is gonna be done, but you get some sort of Editor for sure.

Note, this particular Axe would be very tiny, like half a Minecraft Axe kinda tiny

I believe this would be a hatchet.

This is reminding me of crucible molds and their modular construction, based on the same idea? How would you go about shaping the axe in game, would you hold it, have it on a grid or held in a vice, or have it in a separate window entirely?

Yeah you would make a Mold, but it would be way easier to acquire than what I did in GT6. Once you made something, you can make another of the same kind, though I might make it so you can forget about the Recipe if you dont use it for long enough, so that Books and Paper would become useful.

But first you would need to model the Tool, which is where I meant Clay to model the Shape, so you can put the shape into a blank Mold so you can craft it. Sharpening would require a Grindstone likely. And Flint Tools would just be a sharp Rock you can chop wood with or so.

I want Stuff to be easy to craft in general once you designed it for the first time, or took the Design that someone else shared with you. Maybe I make it so you need to buy Designs from NPCs, or get them from Loot, once you dropped the ones shared by your Friends into a Folder.

Flint shaping uses a process known as knapping, where the aim is to chip off nodules of stone via lithic reduction. I understand it to be quite difficult as it’s easy to mess up a whole project with an incorrect chip, similar to sculpture.

I played a caveman survival shareware game many years ago that had knapping in, you had to click around an outline on a piece of flint trying to keep as close to the outline with random cuts based on how long you held down the mouse button. I think It might have been the first game I played in the survival genre. It was neat as there were no instructions, just you wandering along 2D screens left and right trying to keep your stats up. I seem to recall eating poison berries.

Oh boy, i can only imagine that happening a ton of times with randomly generated Resources, where you dont know what a Fruit does without eating it first. XD

Btw cooking Food would be very similar to designing Tools, so you can make things like custom Cakes and Stuff.

How would one about naming resources? In your documents I think you said it was randomly generated, would folks have the ability to develop local names for things that they would recognize? Sort of like an official Latin based species and common name variant?

Eat this, if you die we’ll name it after you.

Hahahahaha, sure naming it after whoever died from it.

But that would not really work, since you could potentially respawn and dont get a new Name afterwards, otherwise your Name would quite literally become the new word for Death. XD

As long as something has not been renamed by a Player yet (or if you are Admin), you can just change the Name of any existing Resource, so first come first serve. It will just retroactively change the Name of the Resource the NPCs use, since they will use special Strings for that, which get translated.

I like the idea but just be careful to make it easy to figure out in game, people shouldn’t need to go to a wiki or a tutorial to figure out how to do it. ^.^

That’s why simple Recipes for normal Tools will exist, so people can do their normal thing without having to figure out the System. ;D

Honestly I’d think of starting it super simple, instead of so many cubes, start with tools of like, 1, as a rock, then attach a stick to it, then you can start altering it, work the player ‘up’ to the point of many cubes to add/remove.