Wanted to make a reactor and a reactor simulation program, so I needed fuel rod stats. The constantly changing tooltip(saying stats for each coolant) is not convenient (may take much time especially when you use multiple coolants and fuels).
Is it possible to make ‘recipes’ in NEI in this way: Input: Fuel rod + Coolant; Output - None or reactor core. The stats can be written in the same way as they are written in standard machine recipes (emission, self, factor, etc instead of GU, GU/t, tier, etc)? 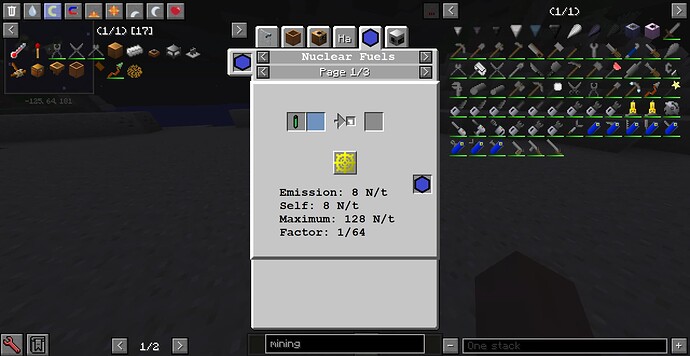 Yeah I would need to understand the system @Erik3003 came up with to do it myself, but maybe he could help with it if he happens to be here somewhen…

I happened to have went through the effort and made a spreadsheet in Excel for the stats. I will post it here:

While I did check it somewhat, mistakes are very possible since it’s manual recording. Actually last time I totally missed the factor boost effect of Molten Thorium Salt.
2 Likes
yangbowen November 9, 2022, 2:48am #5

Is it possible to make ‘recipes’ in NEI in this way: Input: Fuel rod + Coolant; Output - None or reactor core.

Then I suppose the Output should reasonably be Depleted Rods + Hot Coolant and the Machine should be Reactor Core. Also, there should be recipes for Breeding (Breeder Rods → Enriched Rods). This way it would be consistent and we can right-click our way through the lifecycle of Nuclear Fuels in NEI.

Almost everything that should be needed, i.e. how each coolant effects any fuel rod, can be found in the code for the fuel rod tooltips. I’d add the expected duration (i.e. normal duration of rod or a quarter of that if using moderating coolant) and the HU/neutron (1/1 for everything that isn’t tin or sodium) and something to show if the coolant moderates the fuel rod and the depleted fuel rod as the result to MCNaOtlichno’s mockup. An NEI tab for breeding would arguably only need the breeding rod, the product rod, the needed neutrons and the loss, the coolant is irrelevant for breeding, if it isn’t moderating the breeding rod, that is. If you have any questions or things you need to know, ask.

If I pre-compute cycle times and use redstone mechanisms to periodically on-off the reactor, without even reading sensor inputs, will it be safe theoretically despite possible future adjustments, etc.?

and use redstone mechanisms to periodically on-off the reactor, without even reading sensor inputs

I wouldn’t do that for supercritical reactor…

As long as the equivalent-Reflector-count equals the divisor of the Factor in the on-state (and I think all Supercritical Reactors should), the Neutron count increases linearly in the on-state and decreases exponentially in the off-state. Thus it converges (tends to stabilize through cycles) given any specific on-off period, instead of increasing towards infinity or decreasing towards minimal.
That said, it’s still very frightening to control a supercritical reactor like that.

It can actually be proved that, not only does it converge in a single-Fuel-Rod scenario, it also converges towards even distribution of Neutrons when multiple Fuel Rods of the same type emits onto each other, since the Rod with less Neutrons emit less and receive more.

Running a Reactor without a safety sensor is like the “LOOK MOM! NO HANDS!” Meme. XD

Safety is the enemy of progress

Then I’d like to have a safety sensor to detect for states not expected by pre-computation, but still operate it mostly through prediction.
Speaking of that, is there a way to measure the volume of Hot Coolant and only Hot Coolant in a Reactor Core? Since Fluid Sensors seem to measure the total volume (no filtering)?

Have a buffer (drum) of coolant so reactor core is always at least almost full with cold coolant. Then you’ll know that 64 “buckets” is normal, 128 “buckets” is… well… a problem already