I’m continuing to experiment with the Autocrafter and I believe I may have discovered a bug of some kind.

First things first: I tested to make sure my Autocrafter setup was functioning properly by crafting a Pam’s HarvestCraft Caramel Apple in it first.

After doing so, I removed the blueprint for the Caramel Apple and its ingredients from the Autocrafter’s crafting grid, grabbed 1x Stick and 1x Phosphorus Dust, put them in my Advanced Crafting Table, and made the following Blueprint: 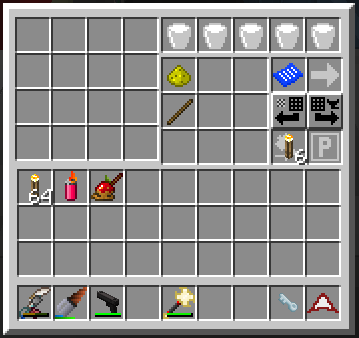 Then to make sure the recipe was working, I crafted those ingredients into 6x Torch in the Advanced Crafting Table. There were no issues there.

Next up, I grabbed another 1x Stick and 1x Phosphorus Dust, placed them in the Autocrafter’s input chest, scanned the Blueprint I previously made to a USB 1.0 Stick. Then, I plugged the USB 1.0 Stick into the Autocrafter’s blueprint slot, and it pulled these ingredients into its crafting grid, which I took as confirmation that it recognized it as a valid recipe.

Then, I pressed the button on top of the Autocrafter to allow it to run (I use an Advanced Button (button mode, signal length 2 ticks) + Auto Redstone Machine Switch cover for this) but rather than initiating crafting, the machine just sat idle consuming power for the entire duration the button was pressed. This was also the case when I converted the button to switch mode and kept the button pressed for several seconds.

Yeah, an outdated nerf is at play here, I think I should remove that one because it is absolutely stupid in hindsight…

What nerf was causing the autocrafter to not work at all?

The “Greg thinks the Autocrafter should not do certain Recipes”-Nerf

I thought that only applied when another machine could perform the same function, was that not the case for the torch recipe? Or is it just simple enough that it doesn’t make sense to not allow it anyway, lol.

That was its original purpose, and Torches DID have a dedicated assembler Recipe in GT5, soooooo, yeah and I ended up losing track of it and did arbitrary bullshit rules… But nowadays the Anvil exists so no longer Hammering Plates on the Crafting Table regardless.