I finally started playing minecraft again after taking a few months off and when I went to charge my drill, it was still only doing 32 eu a second, which I had previously reported. I downloaded the latest release of GT6 and it started charging much faster at first, then it just stopped. I picked up the battery box and made sure that the transformer next to it had its light on, put it back down, and still, tools will not charge. I attached the battery box to a different transformer and still no dice. I threw in an LV lead acid battery and that started charging fine, so I took it out and put the drill back in, and it started charging again but stopped again after a few seconds. Each time I switch the tool out for a battery it gets it going again but always stops after charging the tool for about 5 seconds.

Actually, the longer I let the battery charge, the longer the tool will charge when I switch them.

Can you rightclick the Box with the Debug Scanner (unsure if that will give the buffers or the batteries capacity) just to see if its internal Buffer is actually charging? Because this could only ever make sense if the internal Buffer is somehow screwed.

I’m on a walkabout right now looking for a damn tungsten vein, but will check that when I get back. The blinky light not lighting up when the tools are in the box made me think its internal capacitor isn’t charging up as well, then it does when there’s a battery present, then when I remove the battery, the capacitor empties into the tool until it is out then it stops.

So you are saying the Battery Box is not actually receiving Power from the Wire unless a Battery is inside? Yeah that is easier to understand, I’m gonna look into this.

So you are saying the Battery Box is not actually receiving Power from the Wire unless a Battery is inside? Yeah that is easier to understand, I’m gonna look into this.

It seems like it, but I haven’t used a debug tool yet to verify. Should be easy to test though… slap down an LV battery box and chuck in a used mining drill or lv wrench. In my case it is powered by ab MV-LV transformer connected to a 4x copper cable going to an HV-MV transformer touching an EV-HV transformer fed from my main EV battery box via 1x aluminum cable, but I doubt that matters. 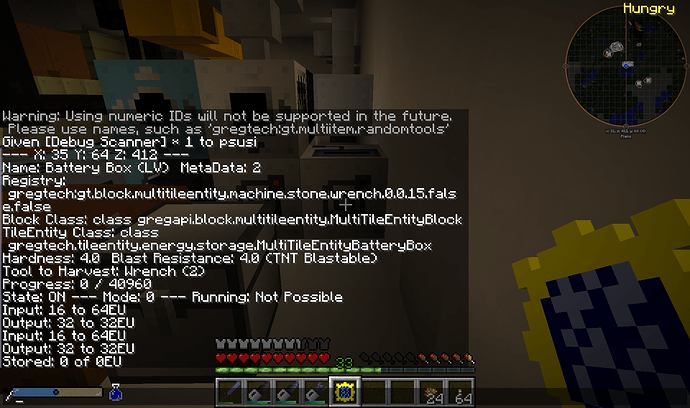 I think a while back I suggested using the the capacity of the installed batteries to limit the rate of charge to fix a surge problem that was introduced with the once a second updating instead of every tick where it would hog all available power every second for a few ticks. I bet that since it sees no batteries installed, it decides the charge rate should be limited to zero. Probably should put a floor on the charge rate as if there were one battery no matter what.

Oh right that version that fixed the table that you already got? That also had an attempt at fixing the Battery Boxes, that I did not test yet. XD

Ahh, nice… it’s working! I just hope it didn’t break the thing where the box would hog all of the power to quickly fill its internal capacitor for a few ticks then stop until the next 1 second. Hrm… now how did I run into that problem before?