If the large crusher can’t push items out due to output pipe saturation, then after the pipe is emptied the automatic output remains suspended and the machine must be emptied by hand or alternative means. Is this intended functionality? I’ve experienced this with the boxinator as well.

Intended unlaggy functionality, use a pipe with more overall capacity at the crushers output location, yes only one pipe, you can run that into a thinner pipe just fine.

Though I wonder why the Inventory Update didnt do anything, was the Crusher turned off?

I see. The crusher has an auto cover on it. And the pipe gets saturated because the end container does. So if I understand this correctly, I’ll need some alternative approach to get it running again.

The Crusher should know when adjacent Pipes become Empty and then push into them, are you sure the Pipe is not jammed anyhow? And the Auto Cover can indeed make it stop outputting.

Yes, I just checked again. I even replaced the pipes. They’re empty and so is the end container. However, the crusher does have an auto cover on it. If I take it off, it starts working again.

Just give it something that it can output everything to at once. A Chest or a GT Hopper might do.

Or as I said a thick Pipe with 6 bandwidth.

The thing is that the crusher is / can be faster than the sluice. I’m designing an automatic crusher, sluice, and centrifuge chain. I might just give it some redstone logic to restart it when it gets blocked. The filter problem from the other forum post is a problem, though. 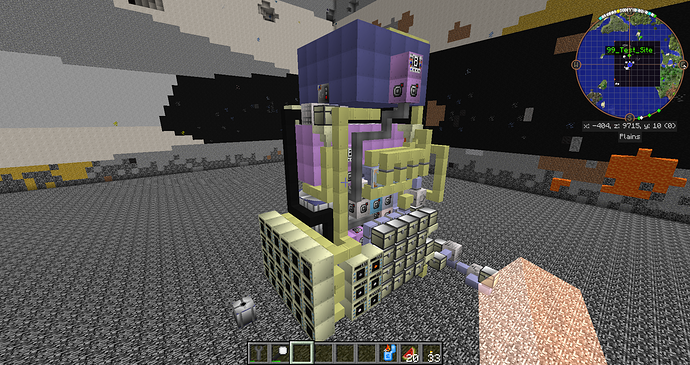 Oh this Big Crusher? Yeah use a Hopper for that Big Boi. The Output is quite large and needs some Buffer space I presume.

IIRC, i’ve seen that happen to any machine that has had its output blocked.
When the machine is no longer powered, the stuff stays in the machine.
And yes, a chest as a buffer does the trick but does of course require a hopper or likewise to empty. It is still the best solution to any setup that can output more than one stack per second. Where stack is of course dependant on the stack size of the item. Item pipes moves stacks. So a buffer chest means any overproduction is stacked as much as possible before being sent through the pipes.

Anything that enters a chest (or regular, non queue, hopper) is automatically stacked. Thus instead of sending say 4 items of X in a stack every second you are now sending 64 items of X every second.
In a perfect world, you’d have a single block buffering machine that only emits full stacks.

Which is why i tend to have really big bandwidth pipes close to any machine where i buffer outputs in item barrels.

And i’ve also found Ultimet pipes to be surprisingly cheap for what they are, 16 bandwidth for a regular sized one is all one ever needs really, unless you are going for a main bus for everything going everywhere.
Sure, they are difficult to produce and may seem rather expensive. But the alloy overall is cheaper long term than making lesser bandwidth pipes.

It’s really unfortunate that these limitations exists due to how MC works.

Oh and one more thing. Seeing the compactness of your setup looks like it’s all confined in a single chunk already. But if for whatever reason it is not…
I always build all my setups to they fit neatly into a single chunk. Going vertical is fine, but crossing a chunk boundary has the potential for weirdness and broken setups even if any crossed chunks are loaded at all times.
In fact, i leave a 2 tile gap between any machine part and a chunk border because i’ve noticed that neighboring chunks can still tick when something happens at the chunk border.

Again, MC works horribly in that regard and if i had the energy to i would confine all auto processing into a single, minimal complexity, chunk to save on performance and avoid chunk related madness.

In a perfect world, you’d have a single block buffering machine that only emits full stacks.

You mean a large enough Hopper set to exact Output of 64?

You mean a large enough Hopper set to exact Output of 64?

But really, a machine that is accessible earlier on perhaps?
And AFAIK, hoppers can only output one item stack at a time? Meaning if you have one coal at the end and then fill the remaining slots with 36 full stacks of graphite, the hopper will also “jam”, won’t it?

The bandwidth of the pipe is not the problem here. But processing material in bulk can fill up any buffer chest you give the output if the next stage is slower. Salt, for example, jams this setup. Fortunately, the large crusher outputs items at the bottom so instead of a pipe I placed a 6-slot hopper which does not limit bandwidth when the crusher is working as items are pushed into it, and when the crusher jams, the hopper pulls items, thus unblocking the crusher. Unfortunately, not all machines output at the bottom so a possible solution would be a hopper and a cheap conveyor belt for when there is a jam.

And i’ve also found Ultimet pipes to be surprisingly cheap for what they are, 16 bandwidth for a regular sized one is all one ever needs really, unless you are going for a main bus for everything going everywhere.

Ultimet pipes are a blessing.

I also made use of ultimet hoppers for tiny purified ore buffering at the boxinator input.

Going vertical is fine, but crossing a chunk boundary has the potential for weirdness and broken setups even if any crossed chunks are loaded at all times.