I’m trying out a garden of glass world and I have an item in my pack that lets me edit biomes freely. I tried using a pure daisy to transform a block of packed ice into river water and made sure that I was in a river biome, but the item gets deleted every time it is spawned. The same happens when it is placed by hand. The idea was to create a single infinite water source that wouldn’t get depleted even in void worlds, to reduce the need for graphic updates when draining large amounts of water, and also giving an opportunity to the players to create sea water to electrolyse for a crucial aluminium precursor, even without oceans.

I have an understanding by looking at the commits and changelog that the river and ocean water blocks are unplaceable because they would ultimately cause problems with their infinite spread, could it be possible to add a whitelist for pure daisy transformations and add a biome check? This way void world players could reap the benefits of efficient rendering too, but in a controlled environment where one would be sure the action was carefully chosen instead of happening accidentally, especially since it would require minetweaking the daisy’s recipe to even be an option.

Isn’t there a Water Flower too?

And the Drain works infinitely on vanilla Water Blocks in River Biomes at the proper Heights too.

The only water-related flower I can think of in botania destroys water source blocks to give mana, there’s nothing (at least off the top of my head) to generate water since getting infinite water is usually a non-issue.

Still, if the drain works infinitely on vanilla water blocks in river biomes then there’s no problem, my base’s pretty high up so all water gets sucked up immediately. What would the correct height interval be for that to happen? I can’t find anything explicit in the changelog, number-wise and checking coverdrain.java doesn’t show a y level that I can easily spot.

That would be the Water Level that the Dimension you are in has, usually just slightly below Y64.

Oh I see, I’ll test how that works out in void worlds starting out at y:64 then.

Alright I’m back!
Apparently no, being in a river biome at y:64 still sucks up any regular water sources in front of a pipe without replacing them. 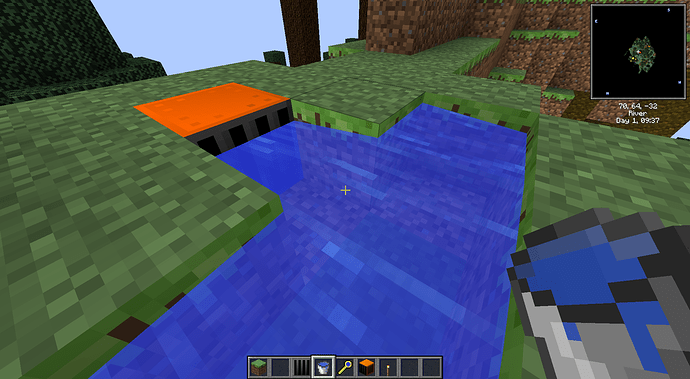 I’ll make sure to tune in more regularly next time

Indeed it was. Water does not get updated but still counts as being sucked up precisely between…
y:62 and y:47.
Took a bit of trial and error.
In any case, I guess the regular way of getting salt water in a void world would be to manually enrich the water with salt, or just add the electrolyzer recipe for salt water to regular water on my end.
Cheers!