The gunpowder barrel has already been added by GT5u.Although it is a little useless.I think Gregtech6 can add some rock layers that have high hardness.So you have to use the bombs to dig holes effectively.Especially when you don’t have the advanced tools.

I think the production of the vanilla TNT can be changed as follows: toluene + sulfuric acid + nitric acid =mixer= TNT dust, TNT dust + string + paper =press= TNT stick, 16 TNT stick + 1 string =boxinator= 1 vanilla TNT
If coal tar can be produced by pyrolysis oven in the future, the production of aromatic hydrocarbons will not be a problem.

The problem I see with this however is that it’s a long process line for something that in my case is obsolete once I make a decent pick. What do you guys use TNT for?

Another use if you have hydaulicraft installed, is the creation of compressed iron.

Wikipedia states that nitroglycerine is used in hydraulic fracturing for producing oil and gas from shale. Perhaps a hydraulic fracturing machine could be placed on oil shale, consume TNT and produce oil/gas while removing oilshale blocks, kind of like a water pump but for shale.

I would guess that ic2’s mining drill code could act a little like that.

2-ethylanthraquinone catalytic cycle is a common method for preparing hydrogen peroxide on an industrial scale.
But such a large oxidized fused ring compound seems to be somewhat difficult to synthesize.(Until now, its production method has only Friedel-Crafts reaction of phthalic anhydride with ethylbenzene.)
Also you need to pay attention to the reaction yield.In the game,the reactor is still rough and many reaction conditions and post-treatments are difficult to carry out.(Such as Chromatographic separation method or other reaction environment)

Also,You can make Disulfuric acid by electrolysis of sulfuric acid.Then let the water to react with it.This process can get H2O2.

The reaction of peroxide with water at low temperature is a laboratory preparation method.The peroxide of the active metal does not seem to be easily prepared or stored, it seems to be somewhat expensive.

By the way,I have a small organic chemistry problem,I want to ask you about it.@Mr.CHEN 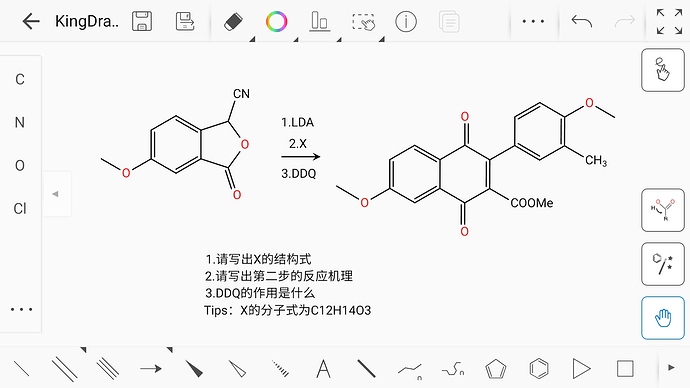 Sodium peroxide can be obtained by burning sodium, if you want to use sodium as fuel…
Phthalic anhydride can be obtained by oxidation of o-xylene or naphthalene, which is not a big problem.
I don’t want to “过柱子” (column chromatography), which is usually used for laboratory synthesis rather than large-scale industrial production, and the chromatographic column will be very troublesome if it is dried carelessly…
The structure of X should be like this. It’s an α,β-unsaturated carbonyl compound. 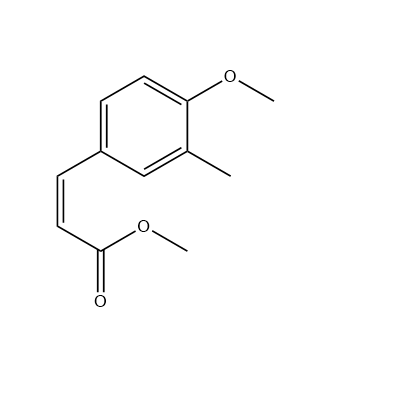 DDQ is a highly active oxidant, usually used for Dehydrogenation to synthesize α,β-unsaturated carbonyl compounds, and the reaction mechanism is not clear to me…

First of all, thank you very much for taking the time to answer my question.In the part you have answered, we all think the same, and the answer should be the same,too.@Mr.CHEN
I will show a possible reaction mechanism that I personally wrote to you, and I remembered it at three in the morning. 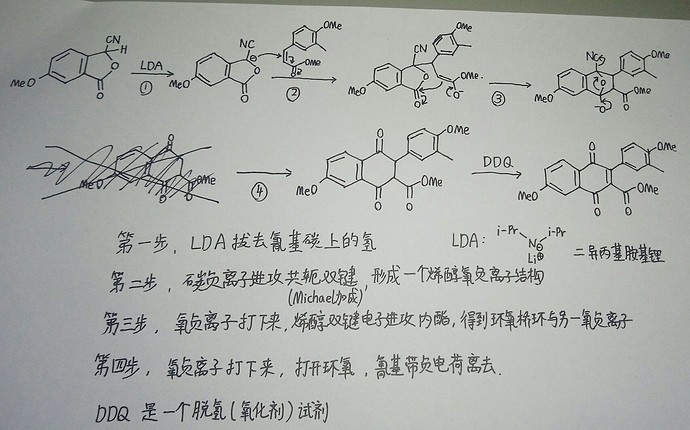 Also,You can make Disulfuric acid by electrolysis of sulfuric acid.Then let the water to react with it.This process can get H2O2.

The reaction of peroxide with water at low temperature is a laboratory preparation method.The peroxide of the active metal does not seem to be easily prepared or stored, it seems to be somewhat expensive.

Could you cite any sources or elaborate on that one please?

Previously, hydrogen peroxide was prepared industrially by hydrolysis of ammonium persulfate,[citation needed] which was itself obtained by the electrolysis of a solution of ammonium bisulfate (NH4HSO4) in sulfuric acid:

2-Ethylanthraquinone is an organic compound that is a derivative of anthraquinone. This pale yellow solid is used in the industrial production of hydrogen peroxide (H2O2). 2-Ethylanthraquinone is prepared from the reaction of phthalic anhydride and ethylbenzene: Both phthalic anhydride and ethylbenzene are readily available, being otherwise used in the large-scale production of plastics. Hydrogen peroxide is produced industrially by the anthraquinone process which involves using 2-alkyl-9,10-...

I found a paper from 1956 for a process producing Peroxydisulfuric acid (H2S2O8) via electrolysis if that’s of any use.

Oops,Today an explosion occurred in a chemical plant in Yancheng, Jiangsu Province. It may be caused by benzene leak, so it has to go back to the topic of benzene.
I think if the coke oven can not be used to produce coal tar, then the pyrolysis oven should be able to separate benzene and some derivatives (such as toluene), other aromatic hydrocarbons, such as naphthalene and anthracene, some derivatives of benzene and heterocyclic compounds, such as phenol, aniline and pyridine. Thiophene is not very useful, so it can be ignored. This is probably the best solution to the controversy over the way benzene is obtained in a month (if you don’t want to modify the recipe of coke oven coking coal)
About which derivatives of benzene should be added… Toluene can be used to make TNT, so phenol can be used to make epoxy resin and picric acid in the future, p-xylene… It may be controversial, chlorobenzene… GT5 is available, but the efficiency of phenol production from chlorobenzene + alkali is not high… Maybe more functions should be added to it, p-dichlorobenzene… GT6 does not seem to need polyphenylene sulfide. As for styrene, if polystyrene is needed as Petri dish for wet-ware biological circuits… Isopropylbenzene is used to produce phenol and acetone. If 2-ethylanthraquinone is needed to produce hydrogen peroxide in the future, then ethylbenzene and phthalic anhydride are also needed.
Some potentially useless materials, such as palladium, can be used as catalysts so that they can have some uses.
In the last,R.I.P

I’m sorry to hear that news.
I lent my mobile phone to my friend. He didn’t return it to me, so I didn’t see the new discussion these days, sorry.
Yeah,the first step is electrolyzing (NH4)2SO4 solution containing H2SO4 to prepare (NH4)2S2O8.There is also a saying that 60% sulfuric acid can be used for electrolysis to directly prepare H2S2O8.
Then stepwise hydrolysis in normal water and 1atm.
The reaction mechanism is as follows.
H2S2O8+H2O===H2SO4+H2SO5
H2SO5+H2O===H2SO4+H2O2
If you want to extract hydrogen peroxide, you can use a vacuum distillation method.

You succeeded in letting me review basic organic chemistry(Pei jian).

Hahaha, the Basic Organic Chemistry is so interesting, isn’t it?

I just think corey A&B should be better than Pei‘s. Maybe the book* Advanced Organic Chemistry* can support you more information.