I saw the progress in the production of reactor cores.
Would the construction of multiple nuclear power plants be irregular? (refers to a cube that is not complete and may be symmetrical in a sense)
What kind of energy will nuclear power output? The description in the change log makes me guess HU?
Maybe large heat exchangers, batteries with higher capacity are needed.

It will output Hot Coolant, so no direct Energy Output, and yeah it will be like IC2s Nuclear Reactors in some sense, but with 2x2 Slots per Reactor Core Block. Lots of Redstone Controls will be required too for turning the thing ON/OFF, and the Mode Switch Covers can decide which of the 4 Rods are UP/DOWN at any given time (Mode 0 = all Rods down, that is if the thing is not switched OFF).

What will the reactor GUI look like? If you’re like IC2, it might be difficult to “disable” certain slots in your code…
If a large amount of hot coolant is to be exported, a large heat exchanger may be needed, which inputs distilled water and hot coolant, and outputs steam and coolant(like GT5U). This is more efficient than a single heat exchanger + boiler, and does not require a complex network of pipes.
Maybe you need some control rods made of Cd-In-Ag alloy (you don’t have to worry about contaminating rice with cadmium at home!).
What is the size of the reactor?

Some ideas I never posted on my old reactor thread (because you reply directly after your own reply), which are quite close to the redstone control concept, but instead of controlling the fuel rods, the fuel would be controlled by different redstone controlled control rods:

I think “Flow channels” is a good name for the liquid/gas-storing components that I previously envisioned as heat vents.

For the actual heat vents, I think it would be good if they only function when supplied with electricity. So people would need to directly supply electricity to the reactor if they want to use those, so they don’t become overpowered or underpowered compared to flow channels. Backup generators are recommended.

A new component that would be possible because of covers would be control rods. These are components with an effect strength that could be dynamically changed by the strength of a redstone signal provided to a special cover. The components and covers could also be set to an int with a selector tag to group them and allow control of multiple groups of control rods in the same reactor:

These control rods allow fine tuning of the reactor in operation, but are more expensive and in the case of the absorber, take up valuable space that could be used by other components. Maybe they should even require energy (ku) to operate or else be in their default state.

I think alternative cooling mechanics, like coolant cells or condensators, are a good thing to spice up the gameplay, but I also see a balance issue with them: Having them instantly feed into the reactor when they are destroyed due to overheating. To prevent this, components that overheat should not just be destroyed, but “disable” the slot they had occupied. The disabled slots may only be fixed by players with the right tools, preferably if the reactor is shut down, if not wanting to end up as radioactive waste.

You know I hate GUIs, there wont be any.

And disabling Slots would be done with Redstone, each Block has 4 Slots so the Mode Selector Cover can easily handle that.

If a large amount of hot coolant is to be exported, a large Heat Exchanger may be needed, which inputs distilled water and hot coolant, and outputs steam and coolant(like GT5U). This is more efficient than a single Heat Exchanger + Boiler, and does not require a complex network of pipes.

What is the size of the reactor?

As much as you want, you can even make just a 2x2 Single Block Reactor with just one of the Blocks shown in the Screenshot.

Yeah this Control Rod Concept is what I had in mind in some way. Each Fuel Rod will have properties like how many Neutrons it emits normally, or how much Energy it emits when hit by another Neutron Source, or a reflected Neutron. I am not sure yet how I will math it out, I only made the Reactor Model so far.

As for the whole Heat and Meltdown System, the Reactor is operated on Liquid Coolant already, so no Coolant Cells or Vents like IC2 has, you just need to be super careful about operating that Reactor since you can easily produce too much power, at least i think I’m gonna make ways for too much power at once.

Also what you dont see on the Picture because i rotated it away with a wrench, there is two Facings for those, one that emits Cold Coolant and one that emits Hot Coolant. Easier for Reactor Logistics.

Just for Reference since the Screenshot changes about weekly: 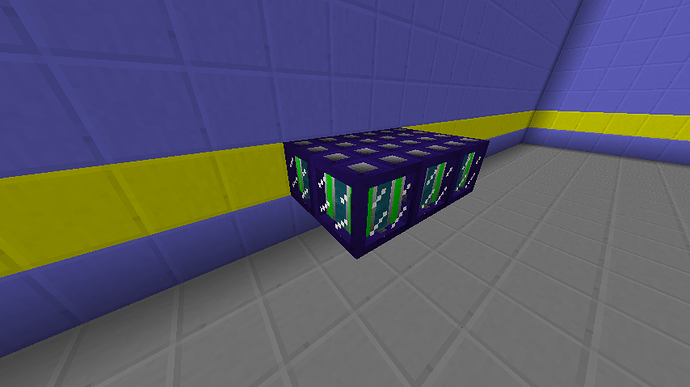 Very interesting design. I can see the performance benefit in having the fuel cores also contain the coolant, but not having the coolant in a separate component block makes the puzzle a little too easy, as being able to pump enough coolant and shutting the reactor down when out of coolant is enough.

The best designs would always be a block of cores surrounded by reflectors that way, as it is the most efficient, not even requiring control rods, when the heat exchanging setup is good enough. I.e. it would be Factorio reactor, but with much simpler piping.

Requiring a separate coolant component block however would make sure that each core would need to touch at least one of those (or a “heat wire”/component heat exchanger), with potentially a limited cooling rate, which would make heat management a thing again.

Even when not limiting the cooling, it would allow for more reactor optimization possibilities as the coolant component block could have several “side effects” depending on the coolant, like water acting as a moderator.

Also, will breeder reactors exist? Then it would probably be good to decide between fast and moderated neutrons, which would open up a lot of possibilities, not just for reactor components (graphite moderator block) and therefore diversifying the reactor layouts, but also for fuels (emitting fast or moderated or both, different effects when getting hit by them, etc).

EDIT:
Maybe my concerns are invalid, because I’m still thinking within the IC2 model of heat management and fuel efficiency. Maybe the puzzle isn’t the fuel efficiency, but controlling neutron economy, the reactivity.

In IC2 reactors, the reactivity is always exactly 1, meaning each tick the reactor will generate the same number of neutrons and thus produce the same amount of energy/heat.

If GT6 reactors however had non-1 reactivity levels, controlling the reactivity with control rods would make a lot of sense, to keep reactors from going critical or turning off. It would also be very elegant to implement:

Neutron-economy successfully simulated with an algorithm of O(n). Obviously requiring some starting neutrons, which could be generated on random block ticks or just by adding a +10 (or and other fuel specific value) to the result of the “new neutron count” equation. Would also work flawlessly with moderated neutrons.

A neutron economy based system would be very interesting and be less focused on the reactor layout and more on the redstone/computer behind controlling the control rods and thus retroactively the reactivity. However one potential problem I see with this system is that keeping the neutron economy very low would be the incentivised option, which is the most boring option. It’s the option with the least risk and the same fuel efficiency, the only downside is a lower HU production, which some would also count as a pro.

I therefore think it’s reasonable to incentivise the danger of a higher neutron count by giving it better fuel efficiency. Maybe it could even be made fuel specific for some fuels (not all), having an optimal temperature for optimal fuel efficiency.

This system would work even better with moderated neutrons, as converting normal neutrons into moderated ones could be an important additional balancing factor, because of the different multipliers of the fuel for moderated neutrons.

Yeah the System is gonna work with Fuel Efficiency based on Neutron Count. The part in the Changelog stating “360 000 000 000 HU per Unit of U-235 at Max Efficiency” is gonna be exactly that.

The Reason for this kinda neutron economy is also that it makes it possible to just have it running as an RTG by itself without any Redstone Controls, though ofcourse that is very inefficient but still easy.

Now with the Neutron Economy you will have situations where you get exponential growth until your Reactor cant handle the Heat anymore no matter how much Coolant you dump in and then BOOM.

So excuse me now, I gotta write code instead of this post XD